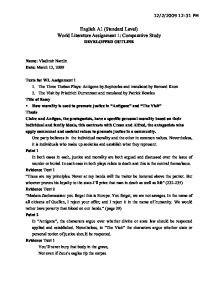 How is morality used to promote justice in Antigone and The Visit?

Claire and Antigon, the protagonists, have a specific personal morality based on their

individual and family ideals, this contrasts with Creon and Alfred, the antagonists who

apply communal and societal values to promote justice in a community.

“These are my principles. Never at my hands will the traitor be honored above the patriot. But whoever proves his loyalty to the state-I’ll prize that man in death as well as life” (232-235)

“Madam Zachanassian: you forget this is Europe. You forget, we are not savages. In the name of all citizens of Guellen, I reject your offer; and I reject it in the name of humanity. We would rather have poverty than blood on our hands.” (page 39)

You’ll never bury that body in the grave,

Not even if Zeus’s eagles rip the corpse

“And now I want accounts between us settled. You chose your life, but you forced me into mine. A moment ago you wanted time turned back, in that wood so full of the past, where we spent our young year. Well I’m turning it back now, and I want justice. Justice for a million.” (page 39)

Investigation: How is morality used to promote justice in ‘Antigone’ and ‘The Visit’?

In ‘Antigone’ by Sophocles and ‘The Visit’ by Friedrich Durrenmatt, each central character uses a specific kind of morality to promote justice in a community. Claire Zachanassian and Antigone, the protagonists in each play, have a personal sense of morality, based on their individual and family value, to promote justice. This pursuit of personal and family justice contrasts entirely with Creon’s and Alfred Ill’s, the other leading figures, communal and societal morality to promote justice. This thesis can be discussed and analyzed through a series of points: morality is influenced by circumstances, situations and the time period. The second point consists of the characters arguing over which interpretation of justice is most relevant to the situation and should be adhered to, a personal application of justice or state justice. Finally, the third point in both plays is about the main characters breaking the law in order to pursue what they believe is right.

The central theme found in both plays is justice. Morality, the underlying factor to promote justice, takes different aspects depending on the situations, time period and the circumstances. In ‘Antigone’, the characters quarrel about whether or not Polynices should be buried according to divine or the state law. On the other hand, in ‘The Visit’ the issue is one of murder for the benefit of the whole community. These two situations although different are both about justice and construct the plot of the respective plays. Each character takes different sides concerning the issue at hand “These are my principles Never at my hands will the traitor be honored above the patriot. But whoever proves his loyalty to the state-I’ll prize that man in death as well as life” (‘Sophocles’ lines 232-235).  This affirmation illustrates the answer of a typical Greek statesman or king (Creon) that places city-state loyalty above family values. However, the contrary is morally right according to Antigone. Furthermore, another rationale for these different attitudes towards the situation is the time period. In ancient Greece, most of the country was divided up in city-states with all inhabitants being sturdily devoted to their state and the gods on Mount Olympus. Thus these three factors of time frame, circumstances and situation affect the characters’ morality and how they promote justice in ‘Antigone’.

This is also true for ‘The Visit’.  In Claire Zachanassian’s case, Ill forced her into a life that she did not choose, prostitution, and in return she will force Ill into a situation that ultimately will result in his death. This circumstance is bound to provoke emotions and conflict. “Madam Zachanassian: you forget this is Europe. You forget, we are not savages…and I reject it in the name of humanity. We would rather have poverty than blood on our hands.” (‘Durrenmatt’, Page 39).  The proposal of the murder of Ill for the benefit for a whole community illustrates clearly Zachanassian’s moral principles of “an eye for an eye” or “vengeance as justice” (Gradesaver). Her intentions of “crime against humanity” (Gradesaver) are clearly seen in the Mayor’s response. Mrs. Zachanassian has a personal sense of morality. In contrast, the Mayor and Ill believe in humanity and in societal morality as most important. Claire’s morality is blinded by her experience of what she has been through, and the time period she has lived in (prostitution, depression and corruption being common themes in the play’s time period). The situation she faces for corrupting and bribing a society into murder also influences her sense of personal justice. The four examples of Creon, Claire Zachanassian, Mayor and Ill influenced moralities illustrate how certain factors affect the morality of each and every character in both plays. Through the origins of the characters different moral stance, distinctive and opposing sides of justice emerge in both plays.

Essentially, in ‘Antigone’, the characters argue over whether divine or state law should be established and respected. However, in “The Visit” the characters argue whether state or personal notion of justice should be respected. There is some similarity between the two plays as one side is “committed to serving the public” (pinkmonkey) and the other is led by the demand of their conscience.

“You’ll never bury that body in the grave,

Not even if Zeus’s eagles rip the corpse

From the violent and metaphorical language here, one can see how Creon condemns actions of his niece and applies “the rule of law”. Finally, the two opposing sides in ‘Antigone’ can be summarized as “the needs of the individual versus the rights of the state” (pinkmonkey). As an illustration, Antigone’s firm stance against her uncle is as similar to Claire’s personal sense of vengeance disguised through justice. Both Zachanassian and Antigone are obstinate and powerful characters that will go at any length to fulfill divine law or right the wrongs of the past. “And now I want accounts between us settled. You chose your life, but you forced me into mine…Well I’m turning it back now, and I want justice. Justice for a million.” (‘The Visit’, page 39). Both characters, Zachanassian and Antigone, interrupt the usual juridical process of Guellen and Creon’s political expediency in stabilizing the chaos in Thebes. The protagonists do so in order to carry out an extra-juridical proceeding, legal or not, that will fulfill their personal desire of justice.  The question for them is not whether these proceedings fairly demonstrate justice but represent their ideals and personal self-indulged sense of justice. Antigone has a very idealistic sense of justice based on family values and morality. To her Creon represents the harshness of the world of physical and political power. Similarly, Ill to Zachanassian represents the unfair and corrupt state justice. Therefore with these different characters and ideals two sides opposing emerge: the idealistic and personal application of justice and society versus state justice implemented for the benefit of a community. Zachanassian and Antigone embody this former aspect of justice, which Ill and Creon embody the latter.  The identification of the two opposing sides demonstrates a clear link between the main character’s morality and how they promote justice breaking law, state or divine, to pursue their will.

In both plays one of the main characters break whether the law in order to pursue what they believe in. Antigone breaks state law by burying Polynices because of for her family ties and the blood relationship she has with him. This fervor to stay committed to her family frees her from any state loyalty and pushes her to break laws  “My own flesh and blood…how many grief our father Oedipus handed down! Do you know one... (‘Antigone’, lines 1-8)” From this we can see  Antigone does not believe she has committed a crime mainly due to the fact she believes in family morality .  This same spirit and morality is found in Claire. As she will to any length to pursue her own justice ““I own those too. And all the factories…the entire township; street by street and house by house...” ( ‘The Visit’, page 66) Claire bribes, corrupts and ruins the whole community of Guellen creating a grand scheme to bend the citizens to her will so they can collectively murder Alfred. On the other hand, Creon and Alfred break divine and state law “Anarchy—show me a greater crime in all the earth! She, she destroys cities…But the ones who last it out, the great mass of them owe their lives to discipline...” (‘Antigone’, lines 751-761) Through the use of the pronoun, “she”, Creon condemns Antigone and hence the gods, as she is the true representative of the gods because he believes in societal morality. He breaks divine law to pursue state justice and bring stability into the chaos prevalent in Thebes. On the other hand, Alfred Ill betrays Claire’s heart and breaks the law of fidelity between the two lovers. He does so through corruption of witnesses, abuse of state law and his fame to protect his wrongdoings and himself. Even though the characters have different motives, they all break laws in the name of their morality to promote their own justice.

In conclusion, morality is an important factor in applying justice. Claire and Antigone, the protagonists, have specific personal moralities based on their individual and family ideals. In Contrasts, Creon and Ill, the antagonists, apply communal and societal values to promote justice according to the demands of a specific community. These differences create two moral opposing sides. These moralities result from three factors: time period, circumstances and the situations influencing each characters morality. Nonetheless, to promote their justice, all characters break divine or state laws. Hence why justice in both plays is heavily influenced by morality.