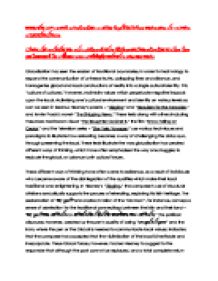 How victims of globalisation have been presented in poems, novels and films.

In the late 20th century some people could be regarded or see themselves as victims of globalisation. Critically evaluate the way composers have represented these people to show how globalisation has created ways of thinking that have affected them. Globalisation has seen the erosion of traditional boundaries, in order for technology to expand the communication of universal truths, collapsing time and distance, and homogenise global and local constructions of reality into a single cultural identity. This "culture of cultures," however, maintains values which perpetuate negative impacts upon the local, victimising one's cultural environment and identity on various levels as can be seen in Seamus Heaney's poems - "Digging" and "Requiem for the Croppies," and Annie Proulx's novel- "The Shipping News." These texts along with others including Yasumara Morimara's visual "The Slaughter Cabinet II," the film "Snow Falling on Cedar," and the Television series - "Star Trek: Voyager;" use various techniques and paradigms to illustrate how retreating becomes a way of challenging the status quo, through preserving the local. These texts illustrate the way globalisation has created different ways of thinking, which have often emphasised the way one struggles to exclude the global, or balance both cultural forces. These different ways of thinking have often come to existence, as a result of individuals who become aware of the disintegration of the qualities which make their local traditional and enlightening. ...read more.

Scientifically, there are those who argue that the victimisation of the local is inevitable, as culture is a social invention, changing since the beginning of history. The "Requiem for the Croppies" however, utilizes past tense to create a nihilistic atmosphere illustrating the way a retreat can be made through counterattacking all consuming global forces such as colonialism - ""Terraced thousands died, shaking scythes at cannons." The image of the priest and the tramp together, transcends class and religious barriers, and illustrates the way the local upholds their land to any cost. The phrase "Shaking scythes at cannons" is symbolic of the inadequacies suffered by the local, however, it allows the local to inherit heroic qualities. The first person plural of "we" and "our," further personalises the local's struggle. The imagery of the barley and the notion of time, invokes the audience's sense of justice, attentively highlighting the local's defiance through counterattacking -"and in august...the barley grew up out of our grave." Like Heaney's poems, the positive qualities of the local, brings about a struggle for those who are confronted with the pressure of global networks to standardise. chapter 25 of "The Shipping News," in particular, sees Proulx's characterisation of Tert Card and Billy Petty, illustrate her debates on the ways individuals are economically victimised - "We're all going to be rich... ...read more.

The contrast of flashbacks however illustrates the extent to which global attitudes affect the local. The parade scene, for instance, is similar to the Christmas Pageant, and contrasts to the flashbacks of World War II, where Japanese fellow citizens are placed into concentration camps. The discontinuation of the music, the spatial distance between the boat exporting the Japanese people and the island creates a dramatic visual impact, convincing us that, at times, the chance the local spirit retreat, after the erosion of communal values, is relatively less. Retreating from the global constitutes an exclusion of global ways and a preservation of contrasting traditional values in order to avoid a victimisation the global perpetuates. As the texts show through creating symbolic relationships with global and local concepts, globalisation has created a vast tapestry of ideals and values. The representations of one's retreat, suggest that the global is all consuming, and negatively impacts upon local culture, as consumerism, materialism and hedonism erode traditions and identity. Retreating is thus more preferable, however, may not always be possible due to the degree cultures have become standardised. Some of the composers, however, illustrate that the global can provide benefits to accommodate the inadequacies of the local. And in turn, most of the texts point to the ideal that there is a need to integrate global and local aspects - a glocalised culture, in order to substantially support one's identity in the 20th century. ...read more.