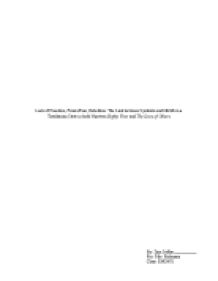 In both the novel Nineteen Eight - Four written by George Orwell and The Lives of Others created by Florian vonDonnersmarck, there are many hidden and significant symbols that reveal many reoccurring patterns

﻿Lack of Freedom, Power/Fear, Rebellion: The Link between Symbols and Motifs in a Totalitarian State in both Nineteen Eighty Four and The Lives of Others By: Zain Safdar For: Mrs. Robinson Class: ENG4U1 Due Date: Nov 6th, 2012 ?A common allegiance to form of expression that is identified with no single national unit is likely to prove one of the most potent symbols of the freedom of the human spirit that the world has yet known.? (Sapir). This is infamous quote made by anthropologist Edward Sapir is significant because it talks about how many of the most potent symbols are hidden or yet to be discovered. It is important to uncover these various symbols because they can reveal many significant themes and many motifs as well. In literature, symbols are very significant because they help the piece of writing feel more real to the audience. Symbols can be used on a much simpler scale; however can be more sophisticated, very diverse and complicated. As a result, symbols are very unique and are open to a person?s perception and this helps bring more true meaning to a specific symbol. ...read more.

This element of risk and rebellion draws parallels to Winston`s diary. They both know the penalty that would have to be paid if caught, however their hate for the government is so strong that it is worth taking that risk. In addition the typewriter also symbolizes the freedom to voice an opinion. In the totalitarian state of East Germany the government wants the citizens to abide the law and not ask any questions. However, Georg decides to write a book that will try to disrupt the government. This shows both his rebellion and first person view to what it is like to live in that type of society, similar to Winston does by writing in his diary about his true feelings on Big Brother and Oceania. In addition, because he can write what he wants with no limitations he is able to talk the truth like Winston in his diary. Both Winston`s diary and Georg`s typewriter is similar to the ?Swing Kids?. This was a group of people who during the ruthless Nazi Germany reign would sneak into private rooms to dance and sing to foreign radio stations. ...read more.

This shows the groups rebellious side and their sneakiness. The reason why it is rebellious is because they are willing to put their lives in jeopardy to write this book. Also, the reason why this is sneaky is because they go to great length to cover up their deed by hiding it in the floor. This is similar to Julia sash due to the fact they are both very rebellious. That is why the three directors are very symbolic of rebellion and also craftiness. That is why it is important to uncover various symbols because they can be linked to many significant themes and motifs. Therefore, if you examine symbols carefully you can extract and see many diverse motifs and themes such as rebellion, power and freedom. In a totalitarian state government like in both the novel Nineteen Eight Four written by George Orwell and The Lives of Others created by Florian vonDonnersmarck, there are many hidden and significant symbols that reveal many reoccurring patterns and show many important themes as well. That is why it is important in life to recognize and acknowledge the symbols because they can help create a link to many reoccurring images that appear every day in people?s lives. ...read more.