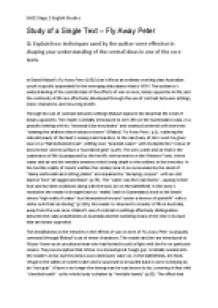 ﻿SACE Stage 2 English Studies Study of a Single Text ? Fly Away Peter Q: Explain how techniques used by the author were effective in shaping your understanding of the central ideas in one of the core texts. In David Malouf?s Fly Away Peter (1982) Jim?s life as an ordinary working class Australian youth is quickly suspended for the emerging disturbance that is WWI. The audience?s understanding of the central ideas of the effects of war on men, binary opposites in life, and the continuity of life are effectively developed through the use of contrast between settings, minor characters, and recurring motifs. Through the use of contrast between settings Malouf explores the idea that life is full of binary opposites. The reader is initially introduced to Jim?s life on the Queensland coast, in a peaceful setting with its ?intensely blue mountains? and swamps bordered with tea-trees ?staining the shallows there tobacco brown? (Malouf, Fly Away Peter, p.1), outlining the natural beauty of the land?s swamps and marshes. ...read more.

The preconception that Wizzer is a stereotypical ?tough guy? is initially seeded into the reader?s mind, but this idea is soon destroyed. Later on, in the battlefields, Jim finds refuge in the safety of a shell crater and is surprised to be pulled back in as he is leaving by an ?iron grip?. Wizzer is no longer the strong man he was known to be, cowering in fear with ?clenched teeth? as his whole body is shaken by ?invisible hands? (p.92). The effect that war has on Wizzer is frightening, conveying the idea of the devastating effects that war can have on men. Jim on the other hand demonstrates that war is capable of producing his capacity to be good. Despite his previous relationship with Wizzer, he makes a determined effort to save him but is ultimately unsuccessful. Malouf?s use of minor characterisation demonstrates the comradery between men that is developed from war and also its traumatic effects on their mental fortitude. ...read more.

This is also the view that Jim later reflects on, predicting it as the last ?vision of the world he knew? (p.55) as he moves on to the other world. It is exactly this view that Jim sees while marching on ?as he felt out of himself? (p.115), seeing the ?scene from high up? as it might look from Bert?s Bi-plane. During this out-of-body experience Jim sees the lives of everything, ?including his own?. From the long view of the soldiers? lives, to the wildlife of ?woodlice under logs? continuing in their ?ordinary domestic arrangements? (p.117). It can be seen that Malouf?s use of the motifs of the birds and the map expresses the perpetual continuity of life that will always remain unaltered. In Fly Away Peter, the author?s use of contrast between the relaxed, peaceful island of Australia and the battered battlegrounds in Europe develops the reader?s understanding of the reality of binary opposites in life. Malouf?s use of minor characters and recurring motifs powerfully communicates the effects that war has on men and the continuity of life. Word Count: 1012 ...read more.