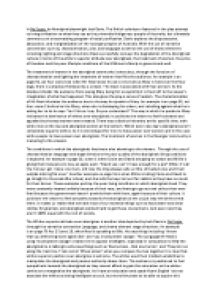 In No Sugar, by Aboriginal playwright Jack Davis. The British colonizers featured in the play attempt to bring civilisation to what they see as the primordial indigenous people of Australia

﻿In No Sugar, by Aboriginal playwright Jack Davis. The British colonizers featured in the play attempt to bring civilisation to what they see as the primordial indigenous people of Australia, but ultimately commerce on a traumatising program of racial purification. Davis explores the dispossession, absorption, and marginalization of the noongar peoples of Australia. With the use of narrative conventions such as; characterisation, plot, and language as well as the use of drama elements including; lighting and stage directions Davis successfully conveys the degradation of the Aboriginals culture in terms of the white?s superior attitude over aboriginals, the treatment of women, the price of freedom and the poor lifestyle conditions of the Millimurra family in government well. The treatment of women in the aboriginal community is atrocious, through the function of characterisation and lighting the treatment of women horrifies the audience. An example is on page 92, act four scene two when Mr Neal raises his cat-o-nine tails as Mary is held over the flour bags, there is a blackout followed by a scream. The black is associated with fear and evil. ...read more.

These examples portray the poor living conditions in which aboriginals lived. They were constantly treated unfairly because of their race, and having to go out and collect their own food because the government doesn?t provide them with them, again because of their culture. It positions the viewer to feel sympathy towards the aboriginals as the unjust way the whites treat them. It makes us realise that we take most of our essential things such as food water and clean clothes for granted, and aboriginals worked hard to get these crucial items. And even now they aren?t 100% equal with the rest of society. The Whites superior attitude over aborigines is another idea depicted by Jack Davis in No Sugar through the narrative convention Language, and drama element stage directions. An example is on page 76 Act 2 Scene 10, when Neal is speaking to Billy. He says things including ?I know that you blithering stone aged idiot? and ?you incompetent savage.? The Language Mr Neal is using ?incompetent savage? creates him to appear intelligent, especially in comparison to Billy the aboriginal he is talking to who says things such as ?Dunno boss...that one he bin-? and ?They bin run along the train line. ...read more.

Now he is no longer there it?s almost as if the hope of ever being free and freedom itself has also died with him. Living in a democratic environment and only being controlled by my parents I find it difficult to understand how they are willing to give up so much to be free, it challenges my beliefs but being given this information it has helped me to better understand how aboriginals were treated and the lifestyle they had, and the fact that they were willing to give up their family, and even their lives to have freedom makes me appreciate how the society is now. Jack Davis? No Sugar is a critique of the violence and cultural destruction caused by British colonialism. Davis explores the absorption, dispossession and marginalisation of the noongar peoples of Australia. Through the use of narrative conventions including, plot characterisation and language, and the function of drama elements such as lighting and stage directions. The degradation of aboriginal culture is effectively communicated in terms of the treatment of women, white?s superior attitude over aboriginals, the price of freedom and the poor lifestyle conditions of the Millimurra family in government well. ...read more.