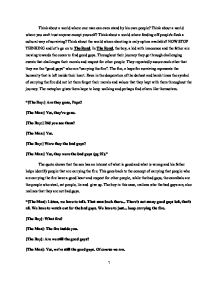 In The Road, the boy, a kid with innocence and the father are moving towards the ocean to find good guys. Throughout their journey they go through challenging events that challenges their morals and respect for other people.

Think about a world where one man can even stand by his own people? Think about a world where you can't trust anyone except yourself? Think about a world where feeding off people's flesh a cultural way of surviving? Think about the world where shooting is only option available? NOW STOP THINKING and let's go on to The Road. In The Road, the boy, a kid with innocence and the father are moving towards the ocean to find good guys. Throughout their journey they go through challenging events that challenges their morals and respect for other people. They repeatedly assure each other that they are the "good guys" who are "carrying the fire". The fire, a hope for surviving represents the humanity that is left inside their heart. Even in the desperation of the darkest and harsh times the symbol of carrying the fire did not let them forget their morals and values that they kept with them throughout the journey. The metaphor gives them hope to keep walking and perhaps find others like themselves. "[The Boy:] Are they gone, Papa? [The Man:] Yes, they're gone. [The Boy:] Did you see them? [The Man:] Yes. [The Boy:] Were they the bad guys? [The Man:] Yes, they were the bad guys (pg 92)." The quote shows that the son has an interest of what is good and what is wrong and his father helps identify people that are carrying the fire. ...read more.

People who do not want to kill anyone are the ones who are carrying the fire because it represents the hope, light in a world full of darkness to carry on without giving in to the culture of the bad guys. "On the mattress lay a man with his legs gone to the hip and the stumps of them blackened and burnt (pg 110)." This scene is that the "bad guys" are not just cannibals, pushed beyond the imaginable limits of hunger. They're actually keeping and raising human beings like you would chickens or cows. This relates to carrying the fire because these bad guys are the ones who are not carrying the fire, while the people are who are carrying the fire, they don't not kill other people and use them as a source of food. Carrying the fire gives them hope to go on the journey without giving in the culture of the bad guys. "Crate upon crate of canned goods. Tomatoes, peaches, beans, apricots. Canned hams. Corned beef. Hundreds of gallons of water in ten gallon plastic jerry jugs. Paper towels, toiletpaper,paper plates. Plastic trashbags stuffed with blankets. He held his forehead in his hand. Oh my God, he said (pg 138)." This quote explains that even though the good guys have difficulties in finding food and shelter for themselves, they always get food and shelter over time. This represents carrying the fire because they don't want to give in to the bad guys, or die, so they find food over ...read more.

The quote explains that people who lost hope, meaning they don't carry the fire anymore wanted to die, while the man and the boy are trying to survive this world and not trying to give into the culture of the bad guys, the man's wife couldn't. She was pleading for "eternal nothingness" meaning she was pleading for death because she lost all her hope for living. [The Man:] Take the gun. [The Boy:] I don't want to take the gun. [The Man:] I didn't ask if you wanted it. Take it (pg 210). This quote was said when both the father and the son knew that the father was about to die soon. The father wanted his son to carry the gun because he wants to protect his son from any attackers. The father knows that the son is carrying the fire, meaning he knows how to survive in this world with humanity and hope. Cormac McCarthy uses the symbol of carrying the fire that represents the hope to survive in the world of cannibalism, darkness, fear and pain. He uses the fire as a way to differentiate between good guys and bad guys. By doing that the father was able to teach the difference between right and wrong to his son. He was able to save and protect him from the bad guys and in end the boy learns right from wrong in this society, and learns how to survive in a world full of hatred, selfishness and cannibalism. Cited Source: McCarthy, Cormac. The Road. New York: Vintage Books, 2006. Print. ?? ?? ?? ?? 1 ...read more.