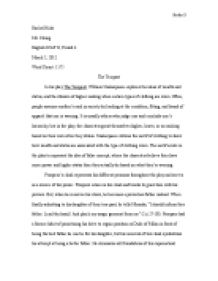 In &quot;The Tempest&quot; Shakespeare utilizes the motif of clothing to show how wealth and status are associated with the type of clothing worn.

﻿Hoke 3 Rachel Hoke Ms. Chung English ICAP II, Period 4 March 5, 2012 Word Count: 1175 The Tempest In his play The Tempest, William Shakespeare explores the ideas of wealth and status, and the illusion of higher ranking when certain types of clothing are worn. Often, people assume another?s rank in society by looking at the condition, fitting, and brand of apparel that one is wearing. It is usually others who judge one and conclude one?s hierarchy, but in the play, the characters grant themselves higher, lower, or no ranking based on their own attire they obtain. Shakespeare utilizes the motif of clothing to show how wealth and status are associated with the type of clothing worn. The motif exists in the play to represent the idea of false concept, where the characters believe they have more power and higher status then they actually do based on what they?re wearing. Prospero?s cloak represents his different personas throughout the play and serves as a source of his power. Prospero relies on his cloak and books to grant him with his powers. ...read more.

Antonio?s apparel represents the benefits that accompany higher power. When Antonio overthrows his brother and takes his place as Duke of Milan, he realizes the reimbursement he is granted also. When Antonio tries to convince Sebastian into killing Alonso and taking his place as king, he reminds him, ?And look how well my garments sit upon me,/ Much feater than before? (II.i 312-314) The clothes fitting Antonio better as king then as only a peasant portrays his postulation that his physical appearance also grants him more power. He believes that when people see him dressed well, they will think of him as on a higher status. This proves to be important to Antonio, improved necessities, such as wardrobe, being one of the reasons he had decided to steal his brother?s place as king initially. The persuasion of having well fitted clothes even proves to sway Sebastian?s decision into killing Alonso, causing him to agree to it. When Gonzalo attempts to influence Antonio into believing that when their clothes were almost ruined in the shipwreck, they have now retained their freshness and are basically good as new because they are on the island, Antonio ridicules the idea. ...read more.

He tries to tell the men that although they have been through hardships, they have redeemed themselves, just as their clothes have. His quote also relates to the fact that although him, Alonso, Sebastian, and Antonio all wear different types of clothing due to their varying social rank, all of their clothes were ruined and were compensated for; therefore, connecting them all and causing the condition of their clothing to be equal. Throughout the play, Gonzalo shows no evidence of having care for increasing in power or if it would bother him if he lost power, and this seems to make him the only one who is sanguine about circumstances and the only one who does not act selfish. Shakespeare utilizes the motif of clothing in the play to reveal the association between wealth and status, and to represent the idea of false concept. Prospero?s relationship with clothing symbolizes his different aspects as a magician and a father. Antonio?s position as Duke of Milan benefits him with better clothing, and causes him to believes his physical appearance affects other people?s opinion on how much power he obtains. Gonzalo is a very optimistic man, and his correlation with clothing proves that. ...read more.