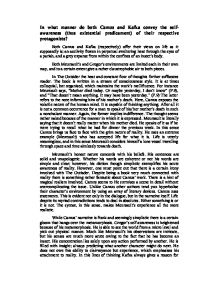 In what manner do both Camus and Kafka convey the self-awareness (thus existential predicament) of their respective protagonists?

In what manner do both Camus and Kafka convey the self-awareness (thus existential predicament) of their respective protagonists?

Both Camus and Kafka (respectively) offer their views on life as it supposedly is; an acclivity frozen in perpetual sweltering heat through the eyes of a pariah, and a grey expanse from within the confines of an insect’s body.

Both Meursault’s and Gregor’s environments are limited each in their own way, and to a certain extent give a rather claustrophobic air to both pieces.

In The Outsider the heat and constant flow of thoughts further suffocates reader. The book is written in a stream of consciousness style. It is at times colloquial, but organised, which maintains the work’s mellifluence. For instance Meursault says, “Mother died today. Or maybe yesterday, I don’t know” (P.9), and “That doesn’t mean anything. It may have been yesterday.” (P.9) The latter refers to the note informing him of his mother’s death. Here, Camus exposes the volatile nature of the human mind. It is capable of thinking anything. After all it is not a common occurrence for a man to speak of his/her mother’s death in such a nonchalant manner. Again, the former implies indifference. The thought seems rather naked because of the manner in which it is expressed. Meursault is literally saying that it doesn’t really matter when his mother died. He speaks of it as if he were trying to recall what he had for dinner the previous week. In this sense Camus brings us face to face with the grim nature of reality. He uses an extreme example (Meursault) who has accepted life for what it is. Life is utterly meaningless, and in this sense Meursault considers himself a lone vessel travelling through space and time aimlessly towards death.

Meursault’s honest nature concords with his beliefs. His sentences are solid and unapologetic. Whether his words are coherent or not his words are simple and clear; however, his diction though simplistic exemplifies his acute awareness of reality. However, one must point out that there is a certain irony involved with The Outisder. Despite being a book very much connected with reality there is something rather fantastic about Camus’ work. There is a hint of magical realism involved. Camus seems to He surmises a scene in detail without overcomplicating the issue. Unlike Camus other authors tend you hyperbolise their character’s environment by using an array of literary devices. Camus uses statements. This is evident not only in the dialogue, but in the narrative itself. Life despite its myriad contradictions tends to deal in absolutes. Either something is or it is not. The syntax, in this sense, makes Meursault’s experience all the more realistic.

While Camus’ narrative is frank and seemingly simplistic there is a certain gloom that hangs over the metamorphosis. Gregor’s self-awareness is heightened because of his metamorphosis. He is able to see the world from a micro level and pick out physical nuance. Much like Meursault’s his observations are intricate, but his senses are much more acute owing to the fact that he has become an insect. His concentration lies solely upon any action performed by another. He is filled with insight; always predicting what another character might do next. He does not owe this ability to clairvoyance but experience, which emphasises his attachment to reality. In this lines of thinking Kafka always gives a reason for Gregor’s actions like when Gregor holds still whilst trying to open the door “so as not to miss a word of the conversation.” (P.83) Again, a prime example of this is when Gregor thinks of the irony of his struggle getting out of bed. All it would have taken was “two strong people”. (P.81) He is absorbed by reality and everything that it entails.

At the beginning of the Metamorphosis Gregor is still convinced that he will go to work as normal despite his change. Again this emphasises his connection to reality. His physical alteration is too absurd for him to come to terms with. He has goals to achieve as talks of paying back “the money (his) parents owe him (boss).” (P.77) Essentially, Kafka maintains the existential nature of Gregor’s situation intertwining it with the absurd experience that Gregor is going through.

Gregor is very perceptive constantly alluding to his past, contrasting and comparing memories with current experiences with the utmost clarity. He says that “those wounds of his must have healed completely by now, for he no longer felt impeded at all; this astonished him, and he thought of how, a month ago, he had cut his fingers with his knife and how only the day before yesterday that little wound had still been painful.” (P.95) His thoughts are elaborate owing to the number of sentences devoted to a single thought. Again, his self-awareness is conveyed through via the stream of consciousness narrative as “he consumed the cheese, the vegetables and the sauce; the fresh foods, on the other hand, were not to his taste, indeed he could not even stand the smell of them.”(P.95) Again, despite Gregor’s seemingly fantastic situation his thoughts always lead back to reality. He is always thinking about material objects and plans for the future unlike Meursault whose attitude towards life is nihilistic and plain.

Camus conveys this using a deadpan style. His words, despite bearing an invisible profundity are simple. The book’s foundations are held together by Mersault’s syntax for his sentences are short, and aphoristic in nature as they say so much (collectively speaking) despite being devoid of any wordiness or excess of any kind.

Samsa’s sense of awareness is exemplified best when Gregor is placed uncomfortable situations. He not only has to deal with his own thoughts, but those of others as well. This is exhibited at the beginning of the novel when the chief clerk is calling him out of his room. For instance ‘(g)regor recognized that he must on no account allow the chief clerk to depart in this frame of mind’ (p. 89). He is aware of the manner in which other people would perceive him or his actions. He is also able to remember precise moments in time as when he recalls that his sister exclaiming ‘You! Gregor!’ as ‘the first words she had addressed to him directly since his transformation’ (p.106).

The fact that Gregor has become a bug puts things into perspective (Kafka’s perspective). One could say that Gregor’s destiny was to metamorphose into a bug making everything that he has accomplished pointless. Gregor’s life becomes meaningless in a more obvious manner when he becomes bug. This is further emphasised by his constant analysis of objects around him. Of one were to juxtapose Samsa’ actions throughout the book next to the book’s end the true meaning of ‘The Metamorphosis’ can be deduced to some extent. There is no clear plot to the metamorphosis. There is no villain and there is no heroic protagonist. There is only Gregor Sams, a man who has metamorphosed into a large bug. This encompasses both the absurd nature of life, and the fact that life is just a sequence of events.

There is also a sense of desperation in both books. Both characters are helpless. Life is like a high tide sweeping them away. Meursault for instance is bound to killing the Arab for he succumbs to his emotions. This instance displays (once again) the volatility of the human mind.

In conclusion both novels display their characters’ heightened sense of awareness in two different ways. On one hand Camus uses a rather flat narrative but informative narrative, which implies Meursault’s observant nature and connection to reality. On the other hand there’s Kafka who uses a larger number of number of literary devices, and other methods like lists.