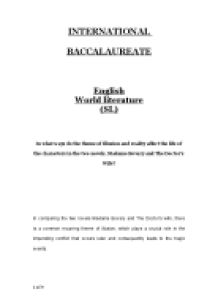 In what ways do the theme of Illusion and reality affect the life of the characters in the two novels, Madame Bovary and The Doctors Wife?

﻿INTERNATIONAL BACCALAUREATE English World literature (SL) In what ways do the theme of Illusion and reality affect the life of the characters in the two novels, Madame Bovary and The Doctor?s Wife? In comparing the two novels Madame Bovary and The Doctor?s wife, there is a common recurring theme of illusion, which plays a crucial role in the impending conflict that occurs later and consequently leads to the tragic events. Illusion in both the cases seems to be the perfect way to escape and to ignore the pain of reality. Emma is self-centered and if she wants something she will do anything to get it. Even though she has many barriers like the societal expectations and the fact that she is married to a man that is far different from the man of her dreams, she secretly tries to live her dreams by indulging in adulterous affairs with numerous men. These escapades of adulterous affairs throw light on her extreme dissatisfaction with her life. ?Emma dressed with the meticulous care of an actress making her debut?.[1] Emma desires an exotic and luxurious life; one of her happiest moments is when she attends a grand ball. ...read more.

When she suffers from this pain she realizes the difference between the life of her illusion and the reality as the way she selected to end her life without any pain caused her immense pain and the man she thought she?ll never be able to live happily with loved her the way she always wanted to be loved and the adultery in which she was involved and thought would change her life, will make her happy and get her a man the qualities she always wanted was not able to keep her happy for a long time. Emma in not the only person in this novel who lives in the world of illusion. Even Charles faces the same problem as according to him, he and Emma are happily married whereas he is unaware of Emma?s adultery. As Charles lives under this illusion nothing gets better between Charles and Emma because according to him she is happy with him. He never completely accepts the fact that she is not happy with him. He thinks she is satisfied with her life and they are living cheerfully together. ...read more.

When she first saw her she doesn?t get chance to talk to her that?s the reason she doesn?t know about her nature, the only thing she gets to see is her beauty. Otsugi and Kae both wanted to sacrifice themselves because they both thought that through sacrifice they would earn the respect, love and attention of Hanaoka. They thought that this is an opportunity to get a higher position in the house whereas after the experiment Hanaoka is the one who gets the whole credit, recognition and respect. Kae, who thought she would get a better position in the house, was left with the devastating results of the new anesthetic. They were ready to sacrifice themselves because they were under illusion that whoever sacrifices will become important to Hanaoka. They were unaware that it might have devastating effects on them. This illusion helps reader to understand why they did everything to make Hanaoka test his anesthetic on them because its difficult for the reader to take the fact that someone is ready to risk their lives just to get Hanaoka?s attention. In both the novels, the illusion gets between the solutions of almost all the problems. It?s the illusion which hide?s the imperfection. Characters don?t get to see the imperfection and that?s the reason they don?t do anything to improve it. ...read more.