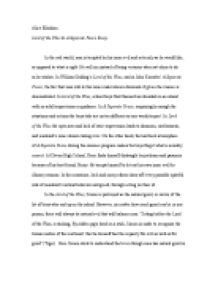 In William Goldings Lord of the Flies, and in John Knowles A Separate Peace, the fact that man will let his inner malevolence dominate if given the chance is demonstrated.

﻿Alice Elbakian Lord of the Flies & A Separate Peace Essay In the real world, man is tempted by his inner evil and acts only as he would like, as opposed to what is right. He will sin instead of being virtuous when set alone to do as he wishes. In William Golding?s Lord of the Flies, and in John Knowles? A Separate Peace, the fact that man will let his inner malevolence dominate if given the chance is demonstrated. In Lord of the Flies, school boys find themselves stranded on an island with no adult supervision or guidance. In A Separate Peace, surprisingly enough the situations and actions the boys take are not as different as one would expect. In Lord of the Flies the open area and lack of strict supervision leads to disunion, carelessness, and mankind?s inner demon taking over. On the other hand, the laid back atmosphere of A Separate Peace during the summer program makes the boys forget what is morally correct. At Devon High School, Gene finds himself distraught by jealousy and paranoia because of his best friend, Finny. He tempts himself to let out his own inner evil for illusory reasons. In the meantime, Jack and many others show off every possible spiteful side of mankind?s natural behavior and greed, through acting on their id. ...read more.

Only after he realizes the effect of his foolishness does he understand how wrong he is about Finny trying to be his own enemy. In reality, Gene is his own worst enemy because he is putting up walls and barriers between himself and the only person who trusts and loves him as a true friend. He is also facing a huge inner conflict because he has no reason or right to have hurt his best friend in that way. No one would ever question that Gene had done it by accident, but when someone finally understood what would he say? He has no way of protecting himself. ?Man is born to sin. Set him free and he will be a sinner, not Rousseau?s ?noble savage?? (Golding). Under certain circumstances, man will make the choice to surrender to his inner evil and do what is morally wrong. Whether it be freedom, jealousy, or carelessness, the inner evil will control and dictate our every thought and action. It is essential to each and every individual?s life that people try to do what is morally right in a time where that seems impossible. Man will find himself surrendering to his inner evil when put into situations that trigger the hatred and jealousy within each and every human being. The question is whether or not your actions will affect more than just one moment of everyday life. ...read more.