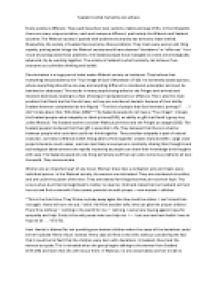 In Wyndham's &quot;The Chrysalids&quot; Sealand or Waknuk, which is the desirable society?

Transfer-Encoding: chunked ﻿Sealand is what humanity can achieve Every society is different. They each have their own customs, habits and way of life. In the Chrysalids there are many unique societies, each and everyone different, particularly the Waknuk and Sealand societies. The Waknuk society is packed with problems humanity has strived to leave behind. Meanwhile, the society in Sealand has overcome these problems. They treat every person and thing equally, putting aside things the Waknuk society would have deemed "deviations" or "offences." As a result of putting aside these problems, the Sealand people have managed to create a technologically advanced city by working together. The society in Sealand is what humanity can achieve if we overcome our primitive thinking and beliefs. Discrimination is a huge part of what makes Waknuk society so intolerant. ...read more.

They believed that there is a barrier between people who could and could not think together. They consider telepathy a part of natural evolution, contrary to Waknuk belief. Being able to think together creates many benefits. Large scale projects become much easier, wars are less likely as everyone is constantly sharing their thoughts and technological advancements are rapidly improving as people can share their knowledge and thoughts with ease. The Sealand people do one thing extremely well that can solve numerous problems all over the world. They communicate. Women are an important part of any novel. Women show how a civilisation acts and treats every individual person. In the Waknuk society, the women are mistreated. They are considered minorities and are under the power of the men. They are blamed for things that they are not their fault. ...read more.

In Sealand, they treat the women as equals. This is revealed when the group begins talking to the women from Sealand (134-135) and learn that she will rescue them. In Waknuk, no one would allow women to talk to another group, yet alone travel and go rescue them. They would have sent a group of men among the likes Joseph Strom. Humanity has strived to treat women equally, although women are still not treated completely equal everywhere it is a huge improvement from Waknuk. Sealand is the opposite of Waknuk. It is technologically and socially advanced open to advancement and progression. They are the ideal society as they treat people with fairness and respect. Although they have their flaws as they have a hierarchy based on telepathic power, they pity but do not punish those who do not have or have weak telepathic abilities. Despite this flaw Sealand society is something that humanity can strive to achieve. ...read more.