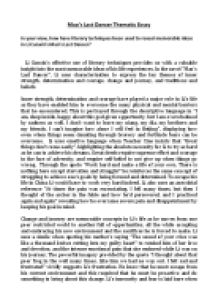 In your view, how have literary techniques been used to reveal memorable ideas in Li Cunxins Maos Last Dancer?

﻿Mao?s Last Dancer Thematic Essay In your view, how have literary techniques been used to reveal memorable ideas in Li Cunxin?s Mao?s Last Dancer? Li Cunxin?s effective use of literary techniques provides us with a valuable insight into the most memorable ideas of his life experiences. In the novel ?Mao?s Last Dancer?, Li uses characterisation to express the key themes of inner strength, determination and courage, change and journey, and traditions and beliefs. Inner strength, determination and courage have played a major role in Li?s life as they have enabled him to overcome the many physical and mental barriers that he encountered. This is portrayed through the descriptive language in ?I am, deep inside, happy about this god-given opportunity, but I am overwhelmed by sadness as well. I don?t want to leave my niang, my dia, my brothers and my friends. I can?t imagine how alone I will feel in Beijing?, displaying how even when things seem daunting through bravery and fortitude fears can be overcome. ...read more.

Li uses a simile when quoting his mother?s saying ?The sound of your cries was like a thousand knives cutting into my guilty heart? to remind him of her love and devotion, and the intense emotional pain that she endured while Li was on his journey. The powerful imagery provided by the quote ?I thought about that poor frog in the well many times. Like him we had no way out. I felt sad and frustrated? vividly suggests Li?s frustration. He knew that he must escape from his current environment and this required that he must be proactive and do something to bring about this change. Li?s insecurity and fear is laid bare when he when asked, ?Why are you, peasant boy, here in this magnificent city? and he responds with a simile thinking, ?I felt like a feather swept up in a whirlwind?. Li felt insignificant and afraid that he was not in control of his destiny as a result of a dramatic change in his surroundings. ...read more.

I?m eternally thankful to Chairman Mao for saving us? reflects the all-pervasive impact of propaganda. Mao and his ideas, or new beliefs, were indoctrinated into the minds of Chinese civilians, brutally enforced to manipulate and shape the communist state. Further symbolism emphasizes this theme when Li states, ?The good characters were always beautiful and handsome. The evil characters have big crooked noses and fat ugly noses?, this being an example of a false stereotype that society had adopted. Li reflects that ?Fair skin was considered beautiful in China? reinforcing to the reader the extreme traditional controls placed upon women, who should have bound feet and be seen but not heard. In conclusion, we can see that Li has brought the most memorable parts of his experiences to life by the effective use of literary techniques. His characters express the key themes of inner strength, determination and courage, change and journey, and traditions and beliefs in a simple but powerful way. Li was in all respects ?Mao?s Last Dancer?, a person who overcame tremendous obstacles to change his life and escape from ?the well?. ...read more.