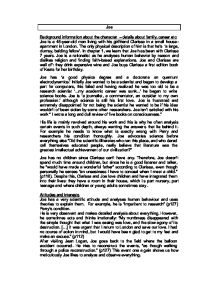 Joe Background information about the character - details about family, career etc Joe is a 48-year-old man living with his girlfriend Clarissa in a small house-apartment in London. The only physical description of him is that he's 'a large, clumsy, balding fellow'. In chapter 1, we learn that Joe has been with Clarissa 7 years. Joe is a rationalist as he analyses human behavior by reason and dislikes religion and finding faith-based explanations. Joe and Clarissa are well off: they drink expensive wine and Joe buys Clarissa a first edition book of Keats for her birthday. Joe has 'a good physics degree and a doctorate on quantum electrodynamics.' Initially Joe wanted to be a scientist and began to develop a part for computers, this failed and having realized he was too old to be a research scientist '...my academic career was sunk...' he began to write science books. Joe is 'a journalist, a commentator, an outsider to my own profession.' although science is still his first love. Joe is frustrated and extremely disappointed for not being the scientist he wanted to be if his idea wouldn't of been stolen by some other researchers. Joe isn't satisfied with his work " I wrote a long and dull review of five books on consciousness." His life is mainly revolved around his work and this is why he often analysis certain events in such depth, always wanting the answers that lie behind it. For example he needs to know what is exactly wrong with Parry and researchers his condition thoroughly. Joe advocates science before everything else "Did the scientific illiterates who ran this place, and who dared call themselves educated people, really believe that literature was the greatest intellectual achievement of our civilization?" Joe has no children since Clarissa can't have any. Therefore, Joe doesn't spend much time around children, but since he is a good listener and talker, he "would have made a wonderful father" according to Clarissa, even though personally he senses "an uneasiness I have to conceal when I meet a child." ...read more.

She's very emotional. She was very depressed when her friend's baby dies. She's a teacher and does lectures on Keats, she's a literary critic. Dad died of Alzheimers when she was twelve and now she's scared of living with someone crazy. (Chapters 1-5) We learn that her father died of Alzheimer's when she was twelve, and now fears and would never like to live with someone who is 'unstable' or who goes crazy (Chapters 6-10) Clarissa gives seminars every day. She is also a literary critic who can "read between the lines of protesting love". Clarissa's family: Professor Jocelyn Kale is Clarissa's godfather. (Chapters 16-20) Attitudes and interests Her interest in Keats hypothetical letters has something to do with their situation and through the relationships she's analyzed in his poems, she analyzes their own and compares. She's not good at expressing her emotions verbally but she expresses herself best through letters. (Chapters 1-5) She enjoys her work, but is sometimes feels strained. She is obviously very sentimental and emotional, as she reproaches Joe of being unable to 'take account of its own emotional field'. She is good with people, and is able to talk down Joe. But then becomes offensive as Joe becomes aggressive and asks why he deleted the messages. They begin to row, and Clarissa covers herself up. They never row usually. She is scared of losing her love for Joe. Joe describes her as 'easy to wound'. (Chapters 6-10). Clarissa is a very emotional person and she chooses not to speak about her feelings with Joe (shows how much their relationship has deteriorated "Clarissa thought her emotions were the appropriate guide, that she could feel her way to the truth" says Joe. This opposes their povs. Joe says that Clarissa is the same as Jean in the way that she feels wronged and expects something of him. Clarissa tries to see the best in everyone. ...read more.

(p.61) but on the other side, Jed is sure something has happened between him Joe at the ballooning accident. He thinks Joe is playing a game with him, that he is pretending not to know what he is talking about. He is persuaded that Joe wants something from him; so that he'll admit that he loves him. He wants Joe, Clarissa and him to meet and talk about the situation; this is the first time that Parry refers to Clarissa in his delusion. Jed's continuous appearances in Joe's life starts to make him nervous, he becomes stressed and uneasy. Clarissa still thinks that Jed is just a "lonely inadequate man, a Jesus freak who is probably living off his parents, and dying to connect with someone, anyone, even Joe". Joe starts to pity him but his pity is quickly replaced by anger, anger at Jed for coming in between of him and Clarissa. P.93 "Begging your forgiveness" P.94 "Constrained as you are by Clarissa's feelings" believes that Joe really does love him. P.95 "I already know a lot about your life. I've made it my job, my mission" Funnily enough, even if Jed is one of the major characters and the reason for the whole novel, his relations are all nonexistent; the only thing that exists is the utter active rejection from Joe's side and Clarissa who believes Jed is either Joe's fabrication or just a weird harmless bloke. Jed only has a relationship with Joe. He writes to Joe, "My love for you is hard and fierce, it won't take no for an answer, and it's moving steadily towards you, coming to claim you and deliver you. In other words, my love - which is also God's love - is your fate," (page 136). Jed not only loves Joe but also obsesses over him. He stands in front of Joe's building for about one hour every day and then leaves. Jed sends Joe 3 to 4 letters a week. They are long, ardent, and written in an increasingly focused present tense. ...read more.