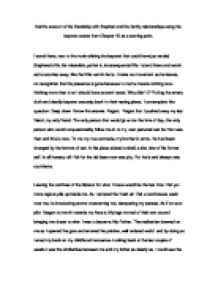 Keiths account of his friendship with Stephen and his family relationships using the bayonet scene from Chapter 10 as a starting point.

Keith's account of his friendship with Stephen and his family relationships using the bayonet scene from Chapter 10 as a starting point. I stand there, next to the trunk shining the bayonet that could have just ended Stephens's life, his miserable, pathetic, inconsequential life. I stand there and watch as he scurries away, like the little vermin he is. I make no movement as he leaves, no recognition that his presence is gone because to me he means nothing now. Nothing more than a rat I should have exterminated. Why didn't I? Putting the emery cloth and deadly bayonet securely back in their resting place, I contemplate this question. Deep down I know the answer. Regret. Regret that I pushed away my last friend, my only friend. The only person that would give me the time of day, the only person who would unquestionably follow me in to my own personal war but that was then and this is now. To me my true comrade, my brother in arms. He had been changed by the horrors of war. In his place existed a shell, a shadow of his former self. ...read more.

had alienated everyone away from me; finally I saw the pure sinister brutality that bubbled and frothed within me, ready to explode like a mine. This was the same vicious streak that my father showed when he beat me, the same streak that had exhibited itself back in the hideout with Stephen. I knew now that this was why people stayed away from me, why I had no friends and why in my mind I was better than everyone else. I had learnt what it meant to be self reliant, to be able to survive on my own, not requiring anybody's help. Especially not that small traitorous rodent, Stephen. He had been a means to an end, something to use and then dispose of like the rest of the common filth in this close. No one, no one could have discovered what I did. How could they have? They weren't as heroic as I was. None of them had helped the war effort like I had, had they discovered a spy that could have helped the Germans invade our country. ...read more.

Suddenly I felt the desire to leave my father's headquarters and retire to my bedroom upstairs. Striding with self importance, I went effortlessly, silently as not to disturb the well balanced order in the house. Once in my room I immediately flung myself on the bed. I lay there staring intently at the ceiling, thinking deeply about the events that had transpired. Betrayed, betrayed by my best friend, the only person I trusted. Trusted because of his attitude, the way I could manipulate him into doing nearly anything for me. More like a dog than a human, a faithful companion to order around. I had no respect for Stephen and deep down I never had. Why would I? He was beneath me. Why would I respect someone who was not my equal? In any way. We were from different walks of life, different classes, differing intellectual capabilities and different capacity for leadership. Would Stephen have been able to form the plans I had readily available for us? I think not. And would he have been able to carry them out like I did? Definitely not. As I lay there, my eyelids slowly becoming heavier one final thought entered my head. I was alone. Words: 971 ?? ?? ?? ?? ...read more.