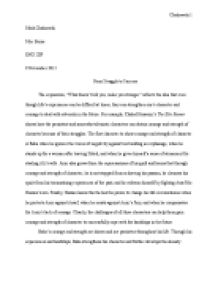 Khaled Hosseinis The Kite Runner shows how the persistent and somewhat altruistic characters can obtain courage and strength of character because of their struggles.

﻿Chakowski Mark Chakoswki Mrs. Burns ENG 2DP 9 November 2012 From Struggle to Success The expression, ?What doesn?t kill you, make you stronger? reflects the idea that even though life?s experiences can be difficult at times, they can strengthen one?s character and courage to deal with adversity in the future. For example, Khaled Hosseini?s The Kite Runner shows how the persistent and somewhat altruistic characters can obtain courage and strength of character because of their struggles. The first character to show courage and strength of character is Baba when he ignores the voices of negativity against his building an orphanage, when he stands up for a woman after leaving Kabul, and when he gives himself a sense of atonement for stealing Ali?s wife. Amir also grows from the repercussions of his guilt and learns that through courage and strength of character, he is not stopped from achieving his passion, he cleanses his spirit from his traumatizing experiences of the past, and he redeems himself by fighting Assef for Hassan?s son. Finally, Hassan learns that he has the power to change his life circumstances when he protects Amir against Assef, when he resists against Amir?s fury, and when he compensates for Amir?s lack of courage. ...read more.

As a result, he graduates as a writer from the community college giving him a better view of courage for his life in the future. Many years after his success in literature, he earns the courage to tells Soraya about his own sin with the same great amount of courage that Soraya had. Amir ?told [Soraya] everything [and he] had pictured this moment so many times, dreaded it, but, as [he] spoke, [he] felt something lifting off [his] chest?? (Hosseini 325). Amir demonstrates strength of character because he has done the right thing that had to be done when they got married, but also shows courage because he risks a negative outcome from Soraya. The fact that is able to live with the secret (of Hassan?s rape) shows that Amir is strong in the sense that he did not let interfere with his daily life. Hosseini teaches the reader that although one risks the chance of receiving of bad judgment, one must accept their own judgement and do what one believes is right. In like manner, Amir shows a great deal of courage when he stands up to Assef to rescue Sohrab from the inhumanity and cruelty of the guards . ...read more.

Khaled Hosseini?s The Kite Runner presents three characters who are met with difficult situations that can give them courage and strength of character for the challenges in the future. Baba quickly learns that his pride and morality are meaningless once he is placed into tough situations. In his moments of bravery, he finds value in his achievements, his deep concern against injustice, and his individuality. Similarly, Amir?who is constantly affected by his guilty conscience?finds a lesson in courage and strength of character. From his experiences, it changes his worldview on the possibilities for himself and on others. Lastly, Hassan?s journey brings him into distressing situations. By standing up against Assef, withstanding against Amir?s peer pressure to retaliate, and sacrificing himself for Amir?s theft, Hassan shows that he has courage and strength of character even if he is just a Hazara. Baba, Amir, and Hassan all got through experiences that challenge their view of the world and themselves in it. Life?s experiences can be difficult but can they strengthen one?s character and courage to deal with adversity in the future. These three characters provide examples of tremendously shocking experiences that become very life-changing for them on the edge of adversity. ...read more.