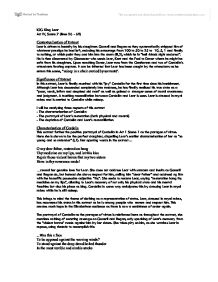 IOC: King Lear Act IV, Scene 7 (lines 26 - 69) Contextualisation of Extract Lear is driven to insanity by his daughters Goneril and Regan as they systematically stripped him of whatever prestige he had left, reducing his entourage from 100 to 50 to 25 to 10, 5, 1 and finally to nothing, at which point they cast him into the storm (III,2), which he in "hell-black night endured". He is then discovered by Gloucester who sends Lear, Kent and the Fool to Dover where he might be safe from his daughters. Upon reaching Dover, Lear runs from the Gentleman and two of Cordelia's attendants fearing capture. It can be inferred that Lear has been caught by the attendants as he enters this scene, "asleep in a chair carried by servants". Significance of Extract In this extract, Lear is finally reunited with his "joy" Cordelia for the first time since his banishment. Although Lear has descended completely into madness, he has finally realised his true state as a "poor, weak, infirm and despised old man" as well as gained a stronger sense of moral awareness and judgment. A touching reconciliation between Cordelia and Lear is seen. ...read more.

Cordelia is therefore seen as an agent of restoration which places her in favourable light with the audience. Her respect for Lear is shown when she quickly kneels after Lear does, as she does not want Lear to lower his status any longer. She places herself on equal ground with Lear, unlike Goneril and Regan who are always ordering Lear around. Her instructions to Lear, "look upon me, sir", "hold your hands in benediction o'er me", are said in a respectful tone and do not contain connotations of demand, again in stark contrast with the behaviour of Goneril and Regan. The Portrayal of Lear's Restoration Lear awakes from his sleep still insane. He thinks that he has died and sees Cordelia as a "soul in bliss". In contrast, he describes himself as "bound upon a wheel of fire". This imagery of a wheel brings to mind the cycle of events that have taken place, and that Lear has finally got what he deserved for his unnatural acts. The wheel can also be seen as a symbol of perpetuity, and the fire as a symbol of immense suffering. Thus, Lear, bound to the "wheel of fire", is destined to suffer for eternity as a wheel never stops spinning. ...read more.

Hope is restored in the audience, as the virtuous characters finally catch a break in the play. However, this hope is quickly dashed in Act 5 Scene 3 when Cordelia, Lear, and Kent all die. This emotional high that preludes the sadness that is to come heightens the pathos and tragedy that is felt at the end of the play, fulfilling the perpetuity of Lear's suffering, to be forever separated from Cordelia. The Depiction of Lear and Cordelia's reconcilliation Lear and Cordelia's reconciliation take place in an atmosphere of peace and love. In this extract, all of the characters present seem to only have good things to say. There is no hellish imagery, except for the "wheel of fire" which Lear uses only to describe the magnitude of his suffering, but rather words like "restoration", "repair", "kind", "dear", "bliss" and "benediction". The atmosphere of love and peace is not even disrupted by any bashing of Goneril and Regan by Cordelia, Lear or Kent. Rather everyone from the Doctor to the Gentleman to Cordelia seems intent in restoring Lear, both physically and mentally. The audience take a breather from the unease and discomfort that have pervaded the play thus far. An this reconciliation scene is a welcome change from all the unnatural subversion of natural order, hellish imagery and ominous settings. ...read more.

This commentary on the passage for IOC on ShakespeareÃ¢â‚¬â„¢s King Lear is very organized in approach, elaborate in content and sharp in approach, accounting for the dramatic action of the scene and highlighting the relevant literary details in appropriate style ...

This commentary on the passage for IOC on ShakespeareÃ¢â‚¬â„¢s King Lear is very organized in approach, elaborate in content and sharp in approach, accounting for the dramatic action of the scene and highlighting the relevant literary details in appropriate style using varied language. Firstly, the commentary is very organized in contextualizing the passage by detailing what is happening and has happened so far in the play. Secondly, the writer states a clear approach and employs this as a backbone to craft his commentary as a three-part response, focusing on the most relevant details of the passage. Thirdly, the writer is able to appreciate a wide array of literary devices such as imagery, allusions, metaphors, and symbols as well as dramatic techniques such as rhetoric, rhythm and meter. In fact, the writerÃ¢â‚¬â„¢s knowledge of literary devices is very sophisticated in that he is able to differentiate between various types of alliteration as plosives, sibilance, assonance and onomatopoeia. The writer is proficient in also brings in the context of scenes where needed to highlight the thematic ideas of the play.

The writerÃ¢â‚¬â„¢s depth in appreciating the literary devices to form a coherent interpretation is interesting. The writerÃ¢â‚¬â„¢s background knowledge in brining in Greek mythology and linking this to factual information as ShakespeareÃ¢â‚¬â„¢s inspiration and impact is unique. The writerÃ¢â‚¬â„¢s use of previous scenes to compare and contrast with this scene not only shows his knowledge of the text, but also shows the sophistication in interpretation by making such links between various parts of the text. This sophistication is also reflected in the writers appreciation of literary devices in the passage to highlight the mood, atmosphere and style of the passage. One recurring feature throughout the commentary is the writerÃ¢â‚¬â„¢s perception of impact on the audience. By interpreting every feature of the text and connecting this to the thematic idea of the text and simultaneously explaining the impact on the audience, the writer manages to establish a sound knowledge and interpretation of the text. In maintaining this tempo of analysis in a highly sophisticated manner, the writer is impressive in his attempt.

The content, grammar, style, register and organization is perfect in this commentary. The only downside and area for improvement would be the organization in terms of timing Ã¢â‚¬â€œ clearly, the last section on the writerÃ¢â‚¬â„¢s analysis on Ã¢â‚¬Å“depiction of Lear and CordeliaÃ¢â‚¬â„¢s reconciliationÃ¢â‚¬Â is not as elaborate or highly commented on as much as the other two parts of the analysis. This could be since the writer might un out of time, so better control of time could e a possible improvement. There are also slips in grammar but these are also quite inconsequential. Overall, this is an excellent IOC commentary on ShakespeareÃ¢â‚¬â„¢s King Lear.