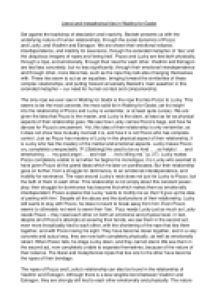 Literal and Metaphorical Ties in Waiting for Godot

﻿Literal and metaphorical ties in Waiting for Godot Set against the backdrop of desolation and inactivity, Beckett presents us with the underlying nature of human relationships, through the social dynamics of Pozzo and Lucky, and Vladimir and Estragon. We are shown their emotional reliance, interdependence, and inability for severance, through the extended metaphor of ?ties? and the ubiquitous imagery of ropes and ?being tied?. Pozzo and Lucky are tied both physically, through a rope, and emotionally, through their need for each other. Vladimir and Estragon are tied less concretely, but no less significantly, through their emotional interdependence and through other, more literal ties, such as the rope they talk about hanging themselves with. These ties seem to act as an equaliser, bringing forward the similarities of these complex relationships, and putting forward universally Beckett?s main assertion in this extended metaphor ? our need for human contact and companionship. The only rope we ever see in Waiting for Godot is the rope that ties Pozzo to Lucky. This seems to be the most concrete, the most solid tie in Waiting for Godot, yet its insight into the relationship of Pozzo and Lucky is verisimilar, or at least quite cursory. We are given the idea that Pozzo is the master, and Lucky is the slave, at least as far as physical aspects of their relationship goes. ...read more.

We are given the idea that this need for contact and human interaction is a fundamental, basic, and universal human need. It is no coincidence that Estragon, the representation of the visceral and the physical aspects of their relationship, is most concerned with being tied. It is Estragon who wants most to be with Vladimir, just as it is Estragon who often talks about parting. What shows their need as being universal even more is the characterisation of Vladimir, Estragon, Pozzo, and Lucky. Their personalities give us the ability to see this as an entirely human message as they have no completely defining universal traits, beyond their desires. This seems to allow us to so thoroughly empathise with the characters, to feel so strongly within ourselves the need for each other that they display so powerfully on the stage. One may argue that these literal and metaphorical ties show how we find self-definition through our goals in life, and indeed, this is a valid interpretation. I would argue though that more than this, it shows how utterly lonely it is, going through life, and how we cling so strongly to these ties, that become a form of limitation and bondage, all so that we can stave off loneliness, through that human contact that has been mentioned again and again. In the end, what seems to be most moving, and most human about these characters is that they fall so easily and so willingly to entrapment, to mask the bleakness that they find themselves in. ...read more.