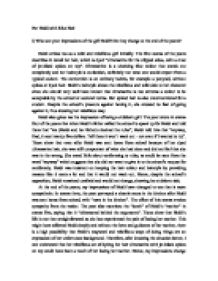 For Heidi with Blue Hair i) What are your impressions of the girl Heidi? Do they change at the end of the poem? Heidi strikes me as a wild and rebellious girl initially. The first stanza of the poem describes in detail her hair, which is dyed "ultramarine for the clipped sides, with a crest of jet-black spikes on top". Ultramarine is a shocking blue colour that stands out completely and her hairstyle is outlandish, definitely not what one would expect from a typical student. The convention is an ordinary hairdo, for example a ponytail, without spikes or dyed hair. Heidi's hairstyle shows the rebellious and wild side to her character since she should very well have known that ultramarine is too extreme a colour to be acceptable by the school or societal norms. Her spiked hair is also unconventional for a student. Despite the school's pressure against having it, she showed no fear of going against it, thus showing her rebellious way. ...read more.

Therefore, after knowing the situation better, I can understand that her rebellious act of dyeing her hair ultramarine with jet-black spikes on top could have been a result of her losing her mother. Hence, my impressions change from being critical initially to being more sympathetic at the end of the poem as I am better able to empathize with Heidi on her unfortunate circumstances. ii) What is the poet's attitude towards the school system and how has she shown this? The poet is critical of the school system and mocks it for being ineffectual. She shows this in stanza two, which is written rather vaguely and shows that the school could not find a rule that forbade dyed hair. The poet merely wrote that "although dyed hair was not specifically forbidden", it was "apart from anything else, not done in school colours". By using this reason to forbid Heidi from dyeing her hair ultramarine, it shows the headmistress's decision to be arbitrary and that she had a tough time finding a reason to forbid Heidi from dyeing her hair ultramarine. ...read more.

The poet also includes in the last stanza of the poem how Heidi's black friend dyed her hair in "grey, white and flaxen yellow - the school colours precisely" as a witty tease. The headmistress had given the reason that Heidi's hair "was not done in the school colours", which probably meant colours that are approved of by the school, but Heidi's friend cleverly misinterpreted school colours as colours that represent the school to tease the teachers. Hence, by including this, the poet shows her support towards not conforming and her disapproving attitude towards the school system for the inflexibility in allowing difference. The poet also criticises the school system for making students conform. She does this by showing her support for Heidi's actions through writing about Heidi's friend dyeing her hair in support of her. Besides, the poet chooses Heidi's friend to be a black. This contrasts greatly with the school colours - grey, white and yellow, much alike Heidi's ultramarine dyed hair. Therefore, this witty tease won the "battle" to break out of conformity, which demonstrates the poet's support of Heidi not conforming to the norm while criticising the school system for insisting on conformity. ...read more.