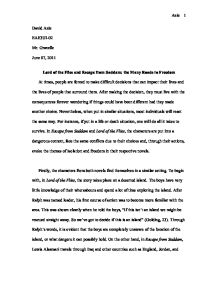 David Aziz EAE3UI-02 Mr. Gravelle June 07, 2011 Lord of the Flies and Escape from Saddam: the Many Roads to Freedom At times, people are forced to make difficult decisions that can impact their lives and the lives of people that surround them. After making the decision, they must live with the consequences forever wondering if things could have been different had they made another choice. Nevertheless, when put in similar situations, most individuals will react the same way. For instance, if put in a life or death situation, one will do all it takes to survive. In Escape from Saddam and Lord of the Flies, the characters are put into a dangerous context, face the same conflicts due to their choices and, through their actions, evoke the themes of isolation and freedom in their respective novels. Firstly, the characters from both novels find themselves in a similar setting. To begin with, in Lord of the Flies, the story takes place on a deserted island. The boys have very little knowledge of their whereabouts and spend a lot of time exploring the island. After Ralph was named leader, his first course of action was to become more familiar with the area. This was shown clearly when he told the boys, "If this isn't an island we might be rescued straight away. ...read more.

The difference between the two lies in the reason behind their actions. In Ralph's case, it was his need to be the leader and his determination to get rescued that made him rebel against Jack's society. On the other hand, it was Lewis's need for freedom and a better life that made him flee Iraq knowing the consequences of getting caught would be very severe. Moreover, another conflict appears in both books, man vs. himself. In Lord of the Flies, all the boys are enduring an internal struggle as they are being torn apart with the decisions they must make. The struggle that lies within the boys is due to their moral convictions. The majority of the boys forget about their morals and simply follow Jack in his reign of chaos. Oppositely, Ralph attempts to stick with his ethics and not give in to the temptation of joining Jack's tribe. It is clear that Ralph is torn between two decisions; that is, would he stick to his ethics or if he would join Jack's tribe like the rest of the boys. In the same way, in Escape from Saddam, Lewis is faced with very difficult decisions that tear him apart. He had to choose between staying in his home in Iraq with his family under the tyranny of Saddam, or taking a risk in fleeing the country and leaving his family behind to pursue a better life in England. ...read more.

Nothing could change the fact that I was an outsider, on the run from the place that I considered home and not tolerated by the authorities in this halfway house. " (Alsamari, 177) In this monologue, it is evident that even in a big city like Amman, Lewis still feels completely isolated and unwanted. In addition, another form of isolation is present in Escape from Saddam. Throughout the novel, Lewis is obligated to isolate others from the truth. On his long journey, Lewis was forced to lie and hide his true intentions with every person he met along the way in fear of getting caught by the authorities. Even after making good friends, Lewis did not allow himself to trust anyone, not even after his arrival in England. In short, the same themes appear in both books but are demonstrated differently in each novel. In conclusion, it is evident that most people, whether it be a group of boys or an isolated man, will react in a similar manner when put in similar situations. Both the characters from Escape from Saddam and Lord of the Flies dealt with a similar context, had similar conflicts and thus the same themes returned in both books. It remains to be seen whether Lewis would have approached his journey differently had he been accompanied by others. ?? ?? ?? ?? 1 Aziz ...read more.