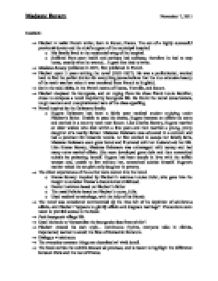 Context: * Flaubert = realist French writer, born in Rouen, France. The son of a highly successful provincial doctor and the chief surgeon of the municipal hospital. o His family lived in the residential wing of the hospital. o Suffered from poor health and perhaps had epilepsy, therefore he had to stay home, exactly what he wanted...it gave him time to write. * Madame Bovary published in 1857, first published in French. * Flaubert spent 5 years writing the novel (1851-1857). He was a perfectionist, worked hard to find the perfect diction for everything (some believe that the true extensive beauty of the work was lost when it was translated from French to English). * Set in the mid-1800s, in the French towns of Tostes, Yonville, and Rouen. * Flaubert despised the bourgeois, and on urging from his close friend Louis Bouilhet, chose to compose a novel inspired by bourgeois life. He found the moral conservatism, rough manners and unsophisticated taste of the class appalling. * Novel inspired by the Delamare family. o Eugene Delamare had been a fairly poor medical student studying under Flaubert's father. Unable to pass his exams, Eugene became an officer de sante and worked in a country town near Rouen. Like Charles Bovary, Eugene married an older widow who died within a few years and then married a young, pretty daughter of a nearby farmer. Madame Delamare was educated in a convent and had a penchant for romantic novels. At first excited to escape her family farm, Madame Delamare soon grew bored and frustrated with her husband and her life. Like Emma Bovary, Madame Delamare was extravagant with money and had many extra-marital affairs. She soon developed great debt and then committed suicide by poisoning herself. Eugene had been deeply in love with the selfish woman and, unable to live without her, committed suicide himself. Eugene's mother raised the couple's only daughter in poverty. ...read more.

o There's a connection of Emma's soul's exhalations to the steam from the beef. Flaubert link's concrete, present objects to emotions; making them inseparable from objects, and in this way Emma is denied her one desire: to escape from the physical world she inhabits and live the life she imagines. o Connecting emotions Emma experiences to concrete objects makes the emotions she experiences real; while the emotions she wishes to experience are fictitious. * Emma is trapped among objects that disgust her. By not allowing us to escape from Emma's world forces us to see its imperfections, therefore making us feel her frustration and claustrophobia. * She falls ill and in an attempt to save her health, Charles decides to move to Yonville. * At the end of the chapter Madame Bovary throws out her wedding bouquet. o Is she trying to erase evidence of her wedding? * When they leave for Yonville, Emma is pregnant. Part II: * Q3: Description of Yonville L'Abbaye. o There is a much more detailed description than Tostes, therefore this setting is more important. It is important for us to have a general idea of the appearance of Yongville, since this is where a lot of the important events take place. * Flaubert does this often; to highlight the importance of a setting he uses more detail when describing it. o (Pg. 49) physiognomies --> the use of this word implies that Flaubert isn't just talking about the regions but also the people who live there. o (Pg. 49) F's opinion of the Bourg. as costly and useless. o Flaubert describes the same scene in contrasting ways, accomplishing two effects. First, he sets himself apart from his romantic predecessors, who would have appraised a dull scene as unworthy of their attention. Second, he contrasts the banality that Emma sees with the beauty that an outsider might instead perceive. ...read more.

* The last thing Emma hears before she dies is the blind beggar singing by her window. o Beggar & windows are 2 important symbols in the novel o She was never able to escape to the world outside her window * The image of the blind beggar occurs several times as the novel nears its end. Emma first feels something akin to pity towards him, but her feelings are always tinged with disgust. His appearance represents the intensifying corruption of Emma's soul, and as her situation worsens, he shows up more and more frequently. It's notable that his horrifying physical appearance is described with the same kind of obsessive detail usually reserved to describe Emma's beauty; we have distinct mental images of both Emma and the beggar, but really not of anyone else. This sets the two of them and links them in our minds.??The presence of the blind man at the scene of Emma's death is particularly disturbing. Emma is profoundly upset by the sound of his harsh voice outside her window as she lies dying, and the end of his song comes at the same moment that Emma dies. Fittingly, the last line of the song tells us that the woman in it was no innocent young lady, but was instead a strumpet who lost her petticoat. This rude ending aligns to Emma's own unfortunate end; while the song's closing line is comical, it comments grimly upon the very un-funny closing of Emma's life. * The book ends with Homais getting the cross of the Legion of Honor. This drives the reader crazy b/c the social climbing Bourgeois man triumphs over all. o Life's not fair, society can be wrong * In the last pages of the novel the tense changes from past to present, bringing the book directly into the world of the reader, therefore making it more real to us ?? ?? ?? ?? [Type text] [Type text] [Type text] Madame Bovary November 7, 2011 ...read more.