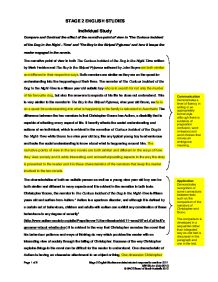 Marked Essay.Compare and Contrast the effect of the narrative point of view in 'The Curious Incident of the Dog in the Night - Time' and 'The Boy in the Striped Pyjamas' and how it keeps the reader engaged in the novels.

The relationships both Christopher and Bruno have with other characters in each novel respectively play a large role in the narrative point of view that is presented in the two texts. It is a common autistic trait that an individual with autism may have a far greater relationship with their parents than any other person. In the novel The Curious Incident of the Dog in the Night - Time' Christopher is a very obedient child, who puts unbinding trust in his father; his mother to Christopher's knowledge was dead. In the novel Christopher makes reference to what his parents had taught him and done for him in order to explain why it is that certain things happen or why he does things. Christopher speaks of how his days are structured and how his parents had influenced that and he has never changed from it (disapproval of change also a common trait of autism). It is his obedience towards his parents that helped model how Christopher speaks, acts and interacts with others in the novel, a crucial way of helping the storylines in the novel evolve. Bruno in the novel The Boy in the Striped Pyjamas is extremely similar in comparison to how Christopher interacts with his parents, especially his mother. "The nine year old child's relationship with his parents, especially with mum, is much improved" (http://childparenting.about.com/cs/childdevelopment/a/nineyearold4.htm). This holds true in reference to Bruno and his relationship with his parents. Bruno relies on his mother mainly to be given guidance and understanding throughout the novel but especially at the beginning. ...read more.

Use of language skills and techniques to create texts that address the meaning and intention of the task. In comparative exercises, recognition of some connections between texts, through responses that compare and contrast texts, usually in a sequential rather than an integrated way. Competent use of evidence from texts to support responses, with some use of textual references in discussion. Skills in using some of the textual, structural, and conventional features of some text types for familiar contexts, audiences, and purposes. Generally fluent and functional writing and speaking, using appropriate style and structure for familiar audiences and contexts. Appropriate use of form and register to convey simple meaning in a narrow range of familiar and unfamiliar contexts. D Knowledge and restricted understanding of some simple stylistic features and language techniques used by authors to communicate mainly familiar ideas, and to influence the reader's response. Knowledge and understanding of some familiar ideas, values, and beliefs in familiar texts. Knowledge and understanding of a restricted number of ways in which creators and readers of a narrow range of familiar texts use some textual conventions to make simple or factual meaning. Reference to simple connections between uncomplicated personal experiences, ideas, values, and beliefs, and those explored in familiar texts. In comparative exercises, answers that make partial comparisons and contrasts. Reference to some ways in which authors use a narrow range of language techniques to influence opinions and decisions in familiar texts. Use of some language skills and techniques to create texts that partly address the meaning and intention of the task. In comparative exercises, some awareness of connections between texts, through partial responses that mainly deal with texts separately. ...read more.