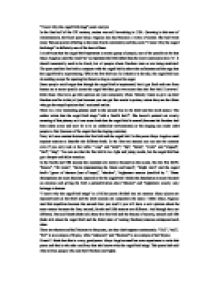 Maya Angelou's I know why the caged bird sings analysis

"I know why the caged bird sings" poem analyze In the first half of the XX century, racism was still havocking in USA. Growing in this sort of circumstances, the black poet Maya Angelou also had became a victim of racism. She had wrote many famous poems referring to the state black community and the poem "I know why the caged bird sings" is definitely one of the best of them. It is obvious that the caged bird represents a certain group of people, one of the proofs can be that Maya Angelou used the word 'he' to represent the bird rather than the more commonly seen 'it'. It doesn't necessarily need to be black, but all people whose freedom were or are being restricted. ...read more.

There is a very interesting phrase used in the second line in the third and the sixth stanza. The author writes that the caged bird sings "with a fearful thrill". She haven't pointed out clearly meaning of this phrase, so it can mean both that the caged bird is scared (because his freedom had been taken away and now he is in an unfamiliar environment) or his singing can make other people to fear (because of the anger that the singing contains). Next, let's see contrast between the free bird and the caged bird. In this poem Maya Angelou used separate stanzas to describe the different birds. In the first two stanzas you can see the contrast even if you only look at the verbs. ...read more.

And though they are different, first and fourth (both talk about the free bird and the beauty of nature), second and fifth (both talk about the caged bird and the bitter taste of loosing freedom) stanzas correspond each other. There are rhymes and half rhymes in this poem, yet they don't appear continuously. "Trill", "still", "hill" is an example of rhyme, while "unknown" and "freedom" is an example of half rhyme. Overall I think that this is a very good poem. Maya Angelou used her own experience to write this poem and that is why she could say that she knows why the caged bird sings. This poem had said what million people who lost their freedom and rights. "Carpet-weavers, Morocco" poem analyze "Muliebrity" poem analyze ...read more.