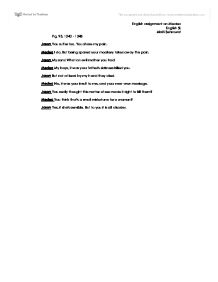 Pg. 95, 1340 - 1348 Jason You suffer too. You share my pain. Medea I do. But being spared your mockery takes away the pain. Jason My sons! What an evil mother you had! Medea My boys, it was your father's sickness killed you. Jason But not at least by my hand they died. Medea No, it was your insult to me, and your new-won marriage. Jason You really thought this matter of sex made it right to kill them? Medea You think that's a small misfortune for a woman? Jason Yes, if she's sensible. But to you it is all disaster. "Medea" is a play composed by the playwright Euripedes. Apart from being a tragic comedy, one of its chief contradictions is that it was created during a time when the role of women was judged to be insignificant weighed against that of Greek men, yet is an eponymous play with a female protagonist. However, this was carried out so as to divulge insights on how women were regarded and thought of in ancient Greek society. Herein, Medea is the critical unification of a tragic hero, a villain as well as a sufferer. The chosen passage corresponds to the ways of the Greek society, conflict in Jason and Medea's marriage, personalities of Medea and Jason, multiple references to sexual rapports, usage of stichomythia and irony present in the play. ...read more.

This fury and considerable self-esteem could have also been the core of Medea's pride, which beyond a point makes her heed exclusively about herself and not forfeit for anything - "In your stubborn pride you reject your dear ones". Medea has been shown as a personality who rejects sympathy - the simile "Like a stone or a wave of the sea" exemplifies that she will not be alleviated and assuaged by accepting sympathy and consequently get reasonably alright. Instead, she will fight for the things she ought to have. Of course, we are aware of the fact that Medea has been wronged. The notion that Jason does not even admit the pain she would go through because of divorce makes her even more embittered and detached. moreover, we can see that being a woman and a wife, Medea has no privilege over Jason's deeds. still, she carries out the assassination of her own offspring at her own resolve, to establish her aim and to incite sorrow in Jason and make him sense accountability for the conditions, "No, it was your insult to me, and your new-won marriage". Medea cannot be dared to be shamed. We can perceive that she takes the state of affairs to her pride and ego. "I wasn't going to let you show dishonour to my bed/And live a life of pleasure, mocking me". ...read more.

An example of this in the play is - "But my boys - I have come to save their lives". This is symbolic of irony throughout the play, which at times brought in the comedy. No matter what the irony is, Jason is essentially assisting as an accomplice towards the devastation of everything. At times, Jason's idiocy is astonishing, as to disentangle himself from financial trouble at that time, he was marrying the princess; this was what he had done formerly in Colchis as well, recieving the penalty of exile. Dramatic irony, otherwise: "stay one more day/That is not long enough for you/To do the damage I fear" in the play; in this case, is due to the audience being aware that one day is adequate for Medea to do the harm she desires. Concluding, this passage is emblematic of very many characteristics of the play. The use of stichomythia offers an opportunity to change the pace and intensity of a scene, to create conflict and explore the relationship of the two speakers; which is what is perceived in this passage. Unity of action is also implied, as the solitary purpose of Medea was to hurt Jason. This passage manages to represent the characters of Medea and Jason, conflicts in marriage, subdual of women and irony in the play amongst other things. 1611 words (excluding passage) ?? ?? ?? ?? English assignment on Medea English SL Akriti Sehrawat ...read more.