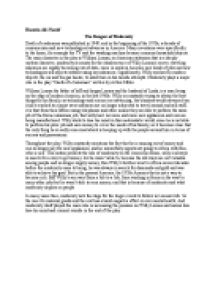 Modernity plays a major role in the play Death of a Salesman written by Arthur Miller.

﻿Hussein Abi Nassif The Dangers of Modernity Death of a salesman was published in 1949, and in the beginning of the 1950s, a decade of consumerism and new technological advances in America. Many inventions were specifically to the home, for example the TV and the washing machine became common household objects. The main character in the play is William Loman, an American salesman that is a deeply useless character, modernity accounts for the obsolescence of Willy Loman's career; traveling salesmen are rapidly becoming out-of-date, since in modern America new kinds of jobs and new technologies sell objects without using any salesmen. Significantly, Willy reaches for modern objects, the car and the gas heater, to assist him in his suicide attempts. ...read more.

And it reached to a point were salesmen are no longer subjected to travel around and sell stuff, it is that from their offices using telephones and other means they are able to perform the same job of the former salesman job, that willy had. As more and more new appliances and cars are being manufactured. Willy starts to lose his mind in this materialistic world, since he is not able to perform his prior job and earn money to cover the needs of his family, so it becomes clear that the only thing he is really concerned about is keeping up with the people around him in terms of success and possessions. ...read more.

But in the present America, the 1950s America that is not a way to become rich. Biff Willy?s son went from a Job to a Job, from working in farms in the west to many other jobs but he wasn?t able to earn money, and that is because of modernity and what modernity implies on people. In many cases then, modernity sets the stage for the tragic events to follow in Loman's life. So the race for material goods and the cost has a harsh negative effect on our mental health. And modernity itself played the main role in increasing the pressure on Willy Loman and makes him lose his mind and commit suicide in the end of the play. ...read more.