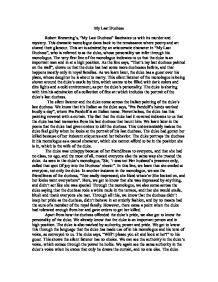 My Last Duchess Robert Browning's, "My Last Duchess" fascinates us with its murder and mystery. This dramatic monologue dates back to the renaissance where poetry and art shared their glamour. This art is admired by an aristocratic character in "My Last Duchess", who is referred to as the duke, whose personality we infer through his monologue. The very first line of the monologue indicates to us that the duke is an important man and in at a high position. As the line says, "That's my last duchess painted on the wall", shows us that the duke has had some more duchesses before, and that happens mostly only in royal families. As we learn later, the duke has a guest over his place, whose daughter he is about to marry. This silent listener of the monologue is being shown around the duke's castle by him, which seems to be filled with dark colors and dim lights and a cold environment, as per the duke's personality. The duke is sharing with him his admiration of a collection of fine art which includes the portrait of the duke's last duchess. The silent listener and the duke come across the Italian painting of the duke's last duchess. ...read more.

Apart from how the duchess offended the duke's pride, we also get to know the personality of the duke. We already know that the duke is an important person and in high position. The duke is also marked by authority, power and pride. We get to know this through the language that the duke has made use of in his monologue and his tone of voice, as conveyed to us. The duke says, "Will't please you sit and look at her?" to his guest. This shows the silent listener has no choice. We can see the authority in the duke's voice, which comes through the power he holds. We again see the same authority in the duke's voice when he states that only he draws the curtain, and no one else. The duke also quotes, "And seemed as they would ask me, if they durst (dared)," which shows how the duke thinks of himself. The duke thinks of himself as superior to other people. He expects everyone to show him respect, and thinks he has class. It is also obvious of the duke's character from the reasons he stated to kill his last duchess. He did not like her behaving in the same manner to everyone else as she did to him. ...read more.

the artistic manner in which "Fra Pandolf" had created that masterpiece, or he could have been able to find some similarities among the duke's last duchess and his own daughter which made him cautious. Another instance we see is towards the end of the monologue, where the duke asks the listener to walk out together. We could see here that the next duchess' father was horrified by the duke's image of himself, and thus had the urge to walk out and get away. These emotions of the listener have all been mostly because of how the duke has portrayed himself. Although the duke has portrayed himself as a very cold character, we still could have some sympathy for the character. The duke is a member of the royal family, where the atmosphere and the entire mood are totally different. It is possible that the duke had been brought up in such a way that carved him into this cold, egoistic character. The duke could have been brought up in a place where the wives would just blindly obey their husbands, and thus he did what he thought right to his last duchess. This is how we can still have sympathy for the duke. This dramatic monologue is a skillful piece of Browning's work, where he has beautifully portrayed character, suspense, and speech. ...read more.