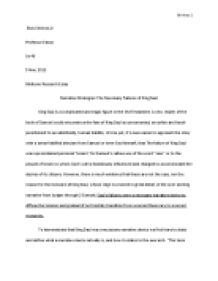 Narrative Devices: The Necessary Failures of King Saul in the Old Testament.

﻿Chirinos Elvis Chirinos Jr Professor Edson Lit 46 5 Nov, 2012 Midterm Research Essay Narrative Strategies: The Necessary Failures of King Saul King Saul is a complicated and tragic figure in the Old Testament. A new reader of the book of Samuel could misconstrue the fate of King Saul as unwarranted; an unfair and harsh punishment to an admittedly, human liability. Worse yet, it?s even easier to approach the story with a sense falsified altruism from Samuel or even God himself; that The failure of King Saul was a preordained personal ?lesson? for Samuel?s callous use of the word ?seer? or to the people of Israel, to whom God?s will is fastidiously influenced and changed to accommodate the desires of its citizens. However, there is much evidence that these are not the case, nor the reason for the inclusion of King Saul, whose reign is covered in great detail, in the over-arching narrative from Judges through 2 Samuel; Saul?s failures were a necessary narrative device to diffuse the tension and gradual (if not hostile) transition from a sacred theocracy to a sacred monarchy. To demonstrate that King Saul was a necessary narrative device we first have to state and define what a narrative device actually is, and how it relates to the overarch. ?This term [narrative device] describes the tool of the story teller (also used in non-fiction), such as ordering events such that they build to a climactic moment or a withholding of information until a crucial or appropriate moment when revealing it creates a desired effect.? (Hernandez, 1) ...read more.

This is worded like a warning, not a prophecy. The word, ?if? insinuates that Saul could turn out either way, which is also supported through this following verse, ?You have not kept the command the Lord your God gave you; if you had, he would have established your kingdom over Israel for all time. But now your kingdom will not endure; the Lord has sought out a man after his own heart and appointed him leader of his people, because you have not kept the Lord?s command? (1 Samuel 13:13). Thus we can move on to Saul, establishing a characteristic that becomes contingent to his downfall: Uncertainty. Saul begins his reign with unfavorable circumstances; he had to take a position that neither Samuel nor God wanted filled. Chapter 9 opens with the narrator letting the audience know that Saul definitely looks the part. He is handsome and a ?head taller? than the average man. The first lesson here is in contrast to the first time David is described to the audience, informing us that the aesthetic of a man does not make a king; but it is the content of his heart (1 Samuel 16:7). Upon seeing Saul, Samuel is informed by God that Saul will be Israel?s first King, and Samuel anoints him, to which he protests, ?Am I not a Benjamite of the smallest of tribes of Israel?? (1 Samuel 9:21). Samuel still continues the proceedings telling all the tribes to gather, but when they do Saul is not found as he is hiding amongst the baggage (1 Samuel 10:21-22). ...read more.

Saul is instructed to go to battle with the Amalekites and destroy everything. He brings back their leader, Agag, alive and the best of their flocks. Saul is again approached by Samuel. Saul is reluctant to admit or take responsibility for the outcome, again trying to excuse himself, blaming the soldiers. He did not understand the gravity of his failures and lost the kingdom altogether with Samuel leaving to anoint a new King (David). Where David accepts his punishment and repents, Saul seems to try and argue his way out of responsibility, suggesting to Samuel in the process that he [Samuel], and in turn God, does not know what sin is. From here on out Saul becomes more isolated and more dangerous, ruthlessly pursuing David in order to murder him, which eventually becomes his demise. Saul then becomes a character narrative device. It is important to see Saul as a failed character who might have succeeded, if it weren?t for these crucial mistakes that at first glance seem trivial. The character then becomes a cautionary tale, and a bar to which other Kings, including David, are held. Both Samuel and Saul were not fit to be Kings, as is exemplified by their character or circumstances. Thus the narrative device was necessary for the audience to understand David?s success, and how easy it was to be a failure. Though the narrator could have simply made David?s virtues apparent, through this very human character we can make a connection and better comprehend that not all men can be kings; after all, it is not the virtues of kingship that we can identify with, but rather the flaws of human nature. ...read more.