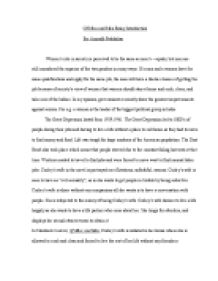 Of Mice and Men. Curleys wife is characterized to portray the sexist attitude of the society towards women,

﻿Of Mice and Men Essay Introduction By: Anirudh Prabhakar Women?s role in society is perceived to be the same as men?s ? equals; but men are still considered the superior of the two genders in many ways. If a man and a woman have the same qualifications and apply for the same job, the man will have a likelier chance of getting the job because of society?s view of women that women should stay at home and cook, clean, and take care of the babies. In my opinion, governments currently show the greatest improvements against sexism. For e.g. a woman is the leader of the biggest political group in India. ...read more.

Curley?s wife is alone without any companions all she wants is to have a conversation with people. She is subjected to the misery of being Curley?s wife. Curley?s wife desires to live a life happily as she wants to have a life partner who cares about her. She longs for attention, and displays her sexual attractiveness to obtain it In Steinbeck?s novel, Of Mice and Men, Curley?s wife is isolated in her house where she is allowed to cook and clean and forced to live the rest of her life without any friends or relationships with which she could break free from her dreary lifestyle. ...read more.

The usual norms of women at that time were to be a housewife and take care of the kids. Carlson exemplifies the sexist attitudes of the society when he says: ?Why?n?t you tell her to stay the hell home where she belongs?? to Curley (on p. 62). Steinbeck also uses the protagonist George to show how society thought about women, as George?s remarks on Curley?s wife demonstrate, ?Ranch with a bunch of guys on it ain?t no place for a girl, specially like her.? Women at that time were merely puppets on strings, you control them the you want to and if a string tears or starts creating problems you simply throw it away. ...read more.