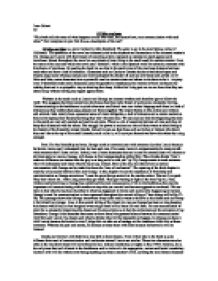 Of Mice and men This book tells the story of what happens to men who need, but cannot have, true communication with each other. How complete do you find this as a description of the text?

Lena Guinot 2C Of Mice and men "This book tells the story of what happens to men who need, but cannot have, true communication with each other." How complete do you find this as a description of the text? Of Mice and Men is a novel written by John Steinbeck. The story is set in the rural Salinas valley of California. The problems of the novel are intimately tied to the rhythms and frustrations of the itinerant worker's life. George and Lennie with their dream of acquiring a farm, represent an attempt to stand against such loneliness. Indeed throughout the novel we see almost all men living in the ranch seek for communication. Even the name of the city near which the novel sets," Soledad", which is the Spanish world for solitude, resonates with this theme of loneliness. By reading the book we see that in the ranch most of the men keep distance between each other and have a lack of tolerance. Characters such as Candy or Crooks decide to bury their hopes and dreams deep inside whereas Carlson and Curley adopted this brutal life and are now brutal and selfish. In Of Mice and Men, some characters have a powerful need to communicate and others invite them to do it. Anyway even if Steinbeck make some characters sound despicable he emphasises the moment of their confession by making them act in a sympathic way or showing their deep hidden but living pain so we can here what they are about to say without having any regard against them. Workers in the ranch such as Lennie end George are inerrant workers and therefore got to follow the work. This suggests that they cannot have the house that they really dream of as they are constantly moving. Communicating in the bunkhouse is quick to become conflictual: men use violent language and there is a lack of tolerance as they neither share past, present nor future together. ...read more.

Both dreamers become victims because they weaken themselves by expressing openly their dreams. The two of them will die Lennie's death echoing Curley's wife's as they both die because of getting to close one to another. Indeed, Curley's wife dies because of getting to close to Lennie and slightly provoking him; wile Lennie gets killed because of getting to close to Curley's wife forgetting Georges advices and his own violence. The woman's need is also shown through her movement constantly closer and closer to Lennie: "moved closer and sat beside him"(p.87). As we can recall, in the previous chapter, she was announcing to the men "You're all scared of each other, that's what. Ever'one of you's scared the rest is goin' to get something on you" (p.77) but we can see now that even she didn't trust anyone enough to talk with as she "ain't told this to nobody before". Curley's wife is so desperate for conversation that she wants to stay there talking with lennie even if she isn't interested in what they are talking about. We can see she has long been seeking for someone she would be able to talk to freely as she has elaborated every single detail of her dream just as George and Lennie do in the second telling of "how things will be". Indeed from the beginning of the book and her first appearance, we see this woman is dangerous within the environment she is part of but this danger is due to the men's attitude. They are mostly very cruel to her not considering her as a complete human being with true feelings but more like "a bitch". Therefore in the ranch, the only way for her to express her presence is to use her sexual power and hoping that thanks to that someone will come up to her to talk. Thus it is often hard to understand Curley's wife's way of reacting as we mainly here of her throught the men in the bunkhouse's words, it allows us to petty her for her naivety seeking contact with these men. ...read more.

Carlson also seems on his way to become violent but already looks like he isn't feeling anymore emotions toward the others. He doesn't understand either the values that push Slim and George to stay together in the end therefore as he says "Now what the hell ya suppose is eatin' them two guys?" this symbolizes a real parture between Slim and George and the bunkhouse culture. His brutal language is shown through most of the things he says such as when he fights with Curley: "You're yella as a frog belly. I don't care if you're the best welter in the country. You come for me, an' I'll kick your god damn head off." Carlson doesn't seem to enjoy communicating with the others of the bunkhouse. The few time he does it, it's used as a foreshadowing of Lennie's faith such as in the shooting of the dog: "The way I'd shoot him, he wouldn't feel nothing. I'd put the gun right there". Carlson often shows himself fascinated by the prospect of violence. In Of Mice and Men we can see that nearly all men are seeking for communications; others, got used to this constant solitude and are on their way to become more and more aggressive physically and morally. We may see that people who are the most wanting to communicate end up talking about their dreams to Lennie even thought they know he isn't listening. Therefore we could say that this book is the story of what happens to men who seek but cannot have true communication. Nevertheless, there are still characters such as George who are able to have a true discussion with Slim. This is why Steinbeck uses in the end what Carlson says to show the difference between Slim and George and the bunkhouse. We can then see that Slim and George are the only two characters that escape to the echoes of the book. ...read more.