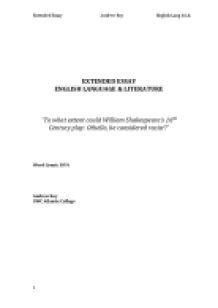 ﻿Extended Essay Andrew Roy English Lang & Lit. EXTENDED ESSAY ENGLISH LANGUAGE & LITERATURE ?To what extent could William Shakespeare?s 16th Century play: Othello, be considered racist?? Word Count: 3876 Andrew Roy UWC Atlantic College Abstract This essay is a detailed analysis of to what extent William Shakespeare?s Elizabethan play of the 1600s: Othello could be considered racist. It investigates Elizabethan views, attitudes and bias towards race and how Shakespeare develops a variety of themes through Othello as a whole such as racism, xenophobia, love, hatred, jealousy and betrayal. Othello sets out to establish the important metaphorical role of colour in the play. In Othello, ?black? and ?white? are more than just skin colours, or a mere physical appearance. They define the character?s cultural background, their inner life, personality, and are largely related to the judging of their personal emotional traits. Through textual analysis, the essay will focus on the varying roles and attitudes of other characters towards the ethnicity of Othello throughout the play. It will analyse how these perceptions and judgements influenced Othello?s view of not only himself, but eventually and inevitably, his personal fate. The characters that will be looked upon in the investigation will be Othello himself, and how his personality, appearance, and portrayal are all signs of racial stereotypes. Iago, Othello?s ?trusted? ensign, Cassio; Othello?s lieutenant, and ?unintended eventual enemy? of Othello; Othello?s wife, Desdemona; her father, Brabantio, and Roderigo and Emilia. Each of these characters played vital roles in how 16th Century racial stereotypes were presented and portrayed in Othello, whether it is black or white. The essay concludes by drawing up connections between these themes and assessing to what extent Othello was in fact a racist play, and how the importance of Othello?s ethnic background played a significant role in the development, running and outcome of the play itself. Word Count: 295 Acknowledgements I would personally like to thank my Extended Essay supervisor, Ken Corn for his hard work and diligence throughout the making of this essay. ...read more.

In the latter stages of the play, Emilia?s racial sentiments become obvious by revealing worse traits about Othello after the murder of Desdemona. She cries out ?O more the angel she, and you the blacker devil!? (5.2.132-133), or calls him ?As ignorant as dirt? (5.2.165). The harshness of her exclamations suggests an inner contempt and fear of Moors, which could have been lurking before the murder.[33] In addition to other character?s prior racial judgements, we are unaware of what Roderigo?s attitude was towards Othello before his marriage to Desdemona, but from the first act onwards, Roderigo goes on with Iago?s racism by calling Othello ?thick-lips? (1.1.66) and ?lascivious Moor? (1.1.126). However, Roderigo?s willingness to take part in Iago?s betrayal of Othello doesn?t necessarily point to a deeply rooted racial bias. It is rather motivated by a powerful and inner jealousy, as Roderigo himself is in love with Desdemona was rejected by her on a separate occasion.[34] Desdemona Desdemona falls in love with Othello despite his black skin and origin.[35] In the play, she had many suitors, but chose Othello, as he had impressed her with his tales of military adventures throughout his life. It was Desdemona who took the initiative to marry Othello, who had probably never dreamt of marrying her, probably due to the racial difference.[36] Furthermore, it was likely Desdemona broke the custom that the man courts the woman, because she knew, Othello was unable to court her due to his skin colour. She also probably knew that her father would not have consented to their marriage and so she eloped with Othello instead.[37] Desdemona views Othello?s blackness as a positive thing, and it is very likely it was the ?exotic otherness? of Othello that attracted her. She is completely devoted to her husband, and remains in love with him throughout the play, even until her deathbed.[38] Iago Iago, the ?trusted? ensign, with the reputation of being outstandingly honest is in a perfect position to betray Othello and to deceive everyone. ...read more.

However, he is still the guilty black man in the end. His fall from a proud and honourable hero to a violent killer is perplexing. By falling for the cunningness of Iago, Othello meets everyone?s expectations of a black man, and, maybe even his own.[62] But to what extent was the play racist? It is unlikely that Shakespeare himself was a racist, or thought negatively of people from abroad. However, using the examples of racist and non-racist characters within the play, suggests Shakespeare was suggesting how a black man couldn?t survive in a white society, regardless of his social class. The old saying ?a leopard can?t change its spots? fits nicely with the context of this play, as Othello, even with his honour, was still a black man, and even more frankly, a Moor in Elizabethan eyes. The tragedy of Othello was in the first place, a human tragedy, but is also due to his ?otherness?. According to Anderson, ?Othello?s marriage was doomed to fail, not because of their biological differences, but due to the social, political and cultural obstacles they had to face.?[63] Despite this, Desdemona?s true love for Othello shows it is possible for a white woman of such beauty to fall in love with a black man. The failure of their marriage is not caused by a lack of love, or even racial differences, but rather, a society who fails to integrate the outsider.[64] Shakespeare portrays Othello as a human being with deep feelings, which address the audience emotionally. He is shown as a hero, a victim and a perpetrator at the same time, and it is probable that the audience hoped for Othello to realize Iago was deceiving him before it was too late. Shakespeare made it possible for the audience to identify the society?s racism at the time, and by doing so, he did more than portray racism? he challenged it. ...read more.