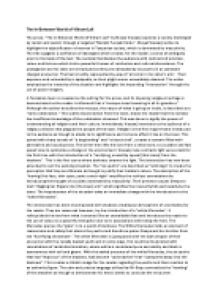 Transfer-Encoding: chunked ï»¿The In-Between World of Vikram Lall The prose, “The In-Between World of Vikram Lall” by Moyez Vassanji explores a society challenged by racism and sexism through a targeted “Nairobi Punjabi Hindu”. Moyez Vassanji writes to highlight the objectification of women in Tanzanian society, which is dominated by masculinity. The title suggests a confliction of ideologies which creates, for the reader, a sense of ambiguity prior to the body of the text. The narrator familiarises the audience with contrasts of emotion, colour and fortune which link to powerful themes of retribution and cultural discordance. The protagonist and his sister are introduced as they are railroaded by six youths in an adrenalin charged encounter. The fear is tacitly represented by way of ‘a tremor in his sister’s arm.’ Their exposure and vulnerability is épalpable, as their plight seems unavoidably doomed. The writer emphasises the intensity of the situation and highlights the impending “intersection” through the use of power imagery. A Tanzanian town is revealed as the setting for the prose, and its imposing religious heritage is demonstrated as the reader is informed that a “mosque stood towering in all its grandeur.” Although the author describes the mosque, the ...read more.

They are reassured however, by the introduction of a ?white Mercedes?. It relinquished the two from what is seemed like an unavoidable fate and introduces the reader to the use of colour as a powerful metaphor due to its associations with being the hero. The Mercedes pierces the ?gate? in to a world of darkness. The White Mercedes holds an element of reassurance and safety that alarms the youths and therefore spares Deepa and her brother from the ?horrifying checkmate?. The white Mercedes is juxtaposed with the dark despair of their encounter with the racially loaded youth and in some ways, this could be interpreted with connotations of racial discrimination, where white is considered pure and saintly and black is synonymous with evil and gloom. With the added presence of the white Mercedes, the six youths that had ?leapt out? of the shadows, had become ?cockroaches? that ?scampered away into the darkness?. This creates a childish image for the reader regarding the youths and their reaction to an authority figure. The calm and precise language utilised by Mr Bapu contradicts the ?howling? of the attackers as though to demonstrate his heroic deeds to conclude the encounter. ...read more.

This memory of fear is what holds back the society that the protagonist lives in. The use of memory is also seen to be of importance during the conclusion of the text. Memory?s significance in the prose aids the writer in making the conclusion that perhaps the ?wild dogs? were not actually ?demons? as perceived. The use of Mr Bapu demonstrates the necessity of viewing both perspectives. It forces the audience to consider that by understanding another person?s perspective, you can avoid a ?terror filled eternity? In conclusion, the criticising piece created by Moyez Vassanji concludes with the realisation of the prejudices in memories. The prose explores themes of racism and sexism in a Tanzanian town that share clashing ideologies. Vassanji concludes that the reason for cultural tension is due to a lack of understanding between feuding cultures and therefore comes to the realisation of the importance of communication and acceptance to eradicate cultural attacks in society. The protagonists? inability to understand his rivals is the root of their feud and this is reinforced when he speaks of ?some celebration. It is this carelessness to appreciate other peoples thoughts that Vassanji attempts to expose through this prose. ...read more.