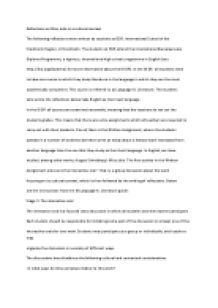 ﻿Reflections on Miss Julie in a cultural context The following reflections were written by students as ISSR, International School of the Stockholm Region, in Stockholm. The students at ISSR attend the International Baccalaureate Diploma Programme, a rigorous, international high school programme in English (see http://ibo.org/diploma/ for more information about the IB DP). In the IB DP, all students need to take one course in which they study literature in the language in which they are the most academically competent. This course is referred to as Language A: Literature. The students who wrote the reflections below take English as their best language. In the IB DP all courses are examined externally, meaning that the teachers do not set the students grades. This means that there are some assignments which all teachers are required to carry out with their students. One of them is the Written Assignment, where the students partake in a number of activities and then write an essay about a literary work translated from another language than the one that they study as their best language. In English, we have studied, among other works, August Strindberg?s Miss Julie. The first activity in the Written Assignment process is the interactive oral ? that is, a group discussion about the work focusing on its cultural context, which is then followed by the writing of reflections. Below are the instructions from the IB Language A: Literature guide: Stage 1: The interactive oral The interactive oral is a focused class discussion in which all students and the teacher participate. Each student should be responsible for initiating some part of the discussion in at least one of the interactive orals for one work. Students may participate as a group or individually, and teachers may organize the discussion in a variety of different ways. The discussions should address the following cultural and contextual considerations. In what ways do time and place matter to this work? ...read more.

Miss Julie - Reflective Statement During our discussion about Miss Julie we argued mostly over the attitude of Miss Julie (particularly towards Jean) - if she is mad or just really nice, and why is she acting in such way. One argument is that she is indeed mad, for she is acting in a way she should not be for she is a noble. On the other hand, I thought that she can be mad in the point of view of the servants, but probably not to the point of view of the readers, who would rather see her as a nice young lady, especially towards Jean whom she likes. Also, Miss Julie asking Jean to dance with her can be reasoned by the event that time, the mid-summer, which is one of the biggest celebrations in Sweden. However, later on we also argued about the relationship between Miss Julie and Jean. Some thought she loves him, for she shows such affection and kindness to Jean. And so does Jean towards his mistress, who later on admitted his feelings he had back then to her. Which opened to more questions like why would Jean do it all of a sudden when on the first part of the play he kinds of backstabbing her mistress? Here I argued that Jean does so for it is his way to sort of pull down his mistress (as one of the themes is the class difference), and to convince to runaway with him. I also disagreed on Miss Julie loving Jean. For I think Miss Julie is only missing the feeling of being loved, for she has lost her fiancé. This made me come back to my first argument of Miss Julie being only nice. Here I realize that probably she probably is mad in some ways, moreover that she is just suddenly ready to run away with her servant. ...read more.

Miss Julie reflective statement. Our Miss Julie Interactive oral focused on different areas of the play such as the symbols but mostly importantly the relationship between Miss Julie and Jean. As the plays main focus is the fall of Miss Julie a misguided higher class woman, who falls hopelessly in love with Jean, a servant in her family?s home. The discussion begins with a look at the theme of the gender conflict, where we can clearly see there is a love triangle between the three main characters Jean, Miss Julie and Kristin, and we can see that all characters are well aware of this but the women ignore it as Kristin feels when Miss Julie is flirting with Jean is okay even though its visible she has feeling for him, and she does this because she feels it is not her place to challenge Miss Julie, while Miss Julie continuously tries to woe Jean even she feels he does not feel the same level of love she feels for him and that he may have something going on with Kristin she continues to fall hopelessly in love with him. This shows us that play sees women as unimportant in society. We can also see the hopelessness of Miss Julie further, when Jean tells her of his plans to take her to a foreign country and to start up a hotel, where she would become the poster girl due to her upper class status and we can see she further on continues her submissive attitude as she continues to agree to whatever Jean says, which is also part of the development to her starting to foreshadow her death, where she talks in a more tragic tone though it?s the initial tone of the play. The learning of this interactive oral were that the dramatist did not have a positive view on women as he made them completely submissive throughout the play and the male character Jean powerful with more purpose and this allow him to take advantage of miss Julie in his ambitions to get to a higher class. ...read more.