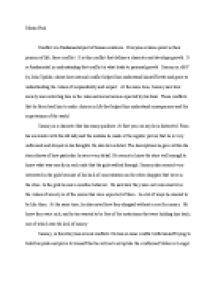 Sammy in A&amp;P by John Updike, shows how internal conflict helped him understand himself better and grow to understanding the values of responsibility and respect.

﻿Martin Paul Conflict is a fundamental part of human existence. Everyone at some point in their journey of life, faces conflict. It is this conflict that defines a character and develops growth. It is fundamental in understanding that conflict is what leads to personal growth. Sammy in A&P by John Updike, shows how internal conflict helped him understand himself better and grow to understanding the values of responsibility and respect. At the same time, Sammy saw how society was restricting him in the rules and social norms expected by his boss. These conflicts that he faces lead him to make choices in life that helped him understand consequences and the expectations of the world. Sammy is a character that has many qualities. At first you can say he is distracted. From his encounter with the old lady and the mistake he made at the register proves that he is very unfocused and strayed in his thoughts. He also loves detail. The descriptions he gave within the story shows of how particular he sees every detail. ...read more.

Another struggle his has is his immaturity that leads to his infatuation over Queenie, who at the end does not even notice him. He never was able to show his rebellion as he quit his job only to prove to the girls that he was too like them. Lastly, his conflict with the life he leads. The manager tells him at the end that he would regret his decision of quitting and that his parents would be disappointed. This enables as us readers to understand he had financial issues in his life that he struggled with. Sammy has a struggle between conformity versus non-conformity in his life. This conflict he endures leads him to quit his job. He describes his working condition as very poor and low as he calls his cashier lane a ?slot?. He does not really conform to his working conditions. He explains how he is not like Stokes, a married man who works as A&P and finds it beneath him to be working there in his awaiting future. ...read more.

He did all this only to try to impress the girls and show that he too was not a person with conformity but rather a rebel. The store manager can also be an example of conformity that Sammy and his non-conformist ways conflict with. He wants to prove to the girls that he is not like Stokes or Lengel and shows the gesture of quitting to impress the girls, but this only gets unnoticed. Lastly, Sammy quits his jobs and Lengel tell him he would regret this. The struggle Sammy has in his life is that one of financial problems which stops him from leading his life of non-conformity. He in many ways is not able to afford the rebellious life style but at the end chooses it only to win over Queenie, his immature infatuation. Sammy does not make a smart choice but one can argue that he made a choice that he was happy with at the end. Although he would be content with his decision, it is a fact that his parents would be disappointed in him and this again leads to another conflict in his life with his caretakers. ~~~~~~CONCLUSION ...read more.