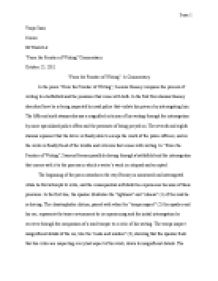 ﻿Susic Vanja Susic Crown IB World Lit ?From the Frontier of Writing? Commentary October 25, 2012 ?From the Frontier of Writing?: A Commentary In the poem ?From the Frontier of Writing?, Seamus Heaney compares the process of writing to a battlefield and the pressures that come with both. In the first four stanzas Heaney described how he is being inspected by road police that violate his privacy by interrogating him. The fifth and sixth stanzas discuss a magnified criticism of his writing through the interrogation by more specialized police offers and the pressures of being preyed on. The seventh and eighth stanzas represent that the driver is finally able to escape the wrath of the police officers, and so the writer is finally freed of the trouble and criticism that comes with writing. In ?From the Frontier of Writing?, Seamus Heaney parallels driving through a battlefield and the interrogation that comes with it to the process in which a writer?s work is critiqued and accepted. The beginning of the poem introduces the way Heaney is monitored and interrogated while he first attempts to write, and the consequential self-doubt he experiences because of these pressures. In the first line, the speaker illustrates the ?tightness? and ?nilness? (1) of the road he is driving. The claustrophobic diction, paired with when the ?troops inspect? (2) ...read more.

Commas after the words ?self? (11), ?subjugated? (12), and ?yes? (12) serve as pauses that represent the exhaustion he feels after the long process of tackling his critics so closely. The words ?subjugated? (12) and ?obedient? (12) are an admittance of how Heaney follows the criticism of those who judge him, and show how at this point he wants to change his writing to fit the expectations of his critics. The fifth and sixth stanzas of this poem represent the magnified criticism of the speaker?s work and how difficult it becomes to evade. The speaker is described to be driving on the ?frontier of writing? (13), setting the scene as a battleground in which his writing battles the criticism he is facing from everyone but himself. As he is driving, ?it happens again? (14); the antecedent of ?it? being confrontation of troopers and thus criticism, and ?again? showing that the speaker cannot get away from this. This time, however, ?guns? are on ?tripods? (14), there is a ?sergeant? (15) as opposed to the former troopers, showing a more profound approach to the intensity of the situation and the interrogation of the speaker. There is repeated data ?about? (16) the speaker, contrasting what he is able to say for himself and what is being said of him that is out of his control. ...read more.

represents literally his car windshield, but metaphorically the clear view he is able to see now that he is no longer distracted and disillusioned by the intense criticism he has faced and passed. In comparing the process of writing and the criticism one faces for his writing to being stopped and interrogated while on a frontier, Heaney outlines the process in which he is finally able to overcome the intense criticism that inhibits his work any further. The title, ?From the Frontier of Writing?, portrays the fact that he has surpassed this criticism, through the word ?from?. Also, the process of writing and publishing a work is referred to as a frontier, expressing how tough and rigorous the process is. Connotations of war refer to everything the writer has to go through in order to be satisfied with their work and allow it to be presented to the public. The poem is split into two general parts: the process of criticism of one?s work, and the consequential reflection and satisfaction one feels after the criticism has passed and been ignored. Therefore, in the poem ?From the Frontier of Writing?, Seamus Heaney accurately compares the process of writing to a battlefield in order to express the criticism and intense procedures and satisfaction felt after finishing a work. ...read more.