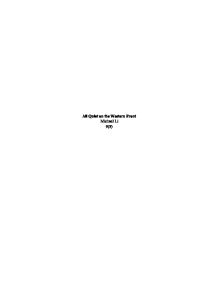 Sequel of All Quiet on the Western Front

All Quiet on the Western Front Michael Li 9(8) Chapter Thirteen I felt my body being lifted, moved towards heaven, and relaxed in peace. When I opened my eyes, I saw-a nurse? What? I opened my eyes bigger, I'm in a hospital! I'm not dead? (After some years, I am told that I'm saved by French, what a shame!)With these questions, I tried to move my legs. They are free! I got myself out of the bed, and walked to the board where there is news and I saw the date. It is November 1918, and the war is over. We lost. We have to sign this The Treaty of Versailles that we need to pay and lose land. In addition, after I leave the hospital, I was told by my neighbors that my mom died soon after the army think I died from cancer. Afterwards, Germany went into a Depression. I am now living in peace for about 20 years, having a family with Maria. We have a child, name Peter. Nevertheless, one day I am driving my car to the market, and I am told that Hitler has been elected for president. I was shocked. Hitler was a private (the lowest rank in military) ...read more.

Now we are in Paris, many people cheers for us, and we feel very proud. Actually the casualties are lower than expectations: 150 died, 249 wounded for a 16,000 men's army. We decided to visit Mullen. When we arrive at the hospital, we are shocked. The hospital is so huge and magnificent and the decoration is luxurious. We went to his bed. The doctor says he will be out of the hospital in two weeks. "Mullen, how is the hospital?" We are trying to make fun of him. "Are there any angels here?" We all laughed. Mullen replied: "Nope. The hospital is quite good, and the food is good. We get to eat steak every day." We are jealous. Although the food is improving, we still get to eat canned food if we are on the battlefield. Actually Mullen comes back in about one week. We cannot see any pain on his eyes, or on his leg or arm. Chapter fourteen It is now 1943. Moreover, the war on the western front is over. It is all quiet. I've been sent to another frontline, which I think the attack is stupid-Russia. Russia is cold and harsh, also there isn't much reason to attack it because Russia didn't attack us, not like in WWI, and Russia attacked us first. ...read more.

However, unfortunately Stauffenberg only finished putting one bomb, and the bomb is moved. Actually, when Stauffenberg comes out of the Castle Wolfenstein, he is confirmed Hitler is dead. Therefore, we start to take over the government. However, when Hitler shows up in the headquarters, and ask what you are doing, we are horrified. We all look at Stauffenberg, so our revolt is demolished. Afterwards, Hitler investigated everyone who was in the headquarters, trying to find out who planned the revolt. I say I don't even know about this thing, but when the evidence comes out, I have to admit I attended the revolt. Unlike Stauffenberg, I was not killed. At a night of complete peace, I was lying on the bed, somebody knocked on the door, and my wife went to open to door. Suddenly, I felt strange, and dizzy. Then I know nothing more. Chapter fifteen He fell in August 1944, on a day that the western side of the war was so quiet, that the army report confined itself to the single sentence: All quiet on the Western Front. He had fallen on his bed and slept forever in his warm bed. Everybody sees him that he is not suffered long, and has an expression of calm, as though almost delight the end has come. ?? ?? ?? ?? ...read more.