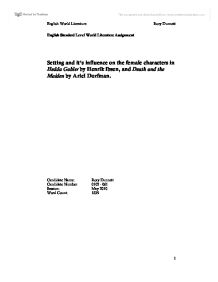 Setting and its influence on the female characters in Hedda Gabler by Henrik Ibsen, and Death and the Maiden by Ariel Dorfman.

English Standard Level World Literature Assignment Setting and it's influence on the female characters in Hedda Gabler by Henrik Ibsen, and Death and the Maiden by Ariel Dorfman. Candidate Name: Rory Dunnett Candidate Number 0102 - 061 Session: May 2010 Word Count: 1539 Setting plays a significant role in Ibsen's Hedda Gabler and Dorfman's Death and the Maiden, as through both the physical setting itself, and the invasion of the setting by other characters in the plays, the female characters - Hedda Gabler and Paulina Escobar, go through a deterioration of character - they become increasingly mentally unstable, and their actions increasingly irrational, which leads to their isolation and in Hedda's case, her suicide. Through setting, Ibsen and Dorfman both show imprisonment, and the effect that this has on the actions and character of Hedda and Paulina. Hedda is stuck in a marriage that bores her. She does not leave the confines of one room throughout the whole play, and is therefore constantly submerged in a place in which she is miserable. This is ironic, as like their marriage, her bridegroom Jorgen Tesman purchased the house on misconceptions and miscommunications, thinking that it was "the home [she] dreamed of, swooned over."1 However later on when Hedda is talking to Brack, we find out that she only said this because once when they were walking past it, Tesman had "run out of conversation." ...read more.

The sense of Miranda being her prisoner is enforced by the movement of the characters - Paulina and Gerardo enter a and exit freely, however Miranda is tied to the chair throughout, apart from when eating and when he goes to the toilet, yet even then Paulina accompanies him 'sticking the gun in his back.'8 It is being in her own personal setting where she feels safe and secure and can control what occurs that gives her the confidence to try this man. She says to him, "Out there your bastards may still give the orders, but in here, for now, I'm in command. Now is that clear?"9 The invasion of her property by the Doctor acts as the catalyst for her actions. This attempt to control the space is also reflected in the stage directions showing Paulina's movement - they show her to be constantly walking around the interrogation room, and moving in and out of the room. The boredom that results from Hedda's prolonged confinement leads to her morality becoming increasingly worse. The first instance that her boredom causes her to be manipulative is when she convinces Mrs. Elvsted that they are good friends. Hedda does not, and never has felt any affection for Thea- Mrs. Elvsted admits that Hedda "terrified" her and "When [they] met on the stairs, [Hedda] pulled [her] hair." Felt any affection for Thea. ...read more.