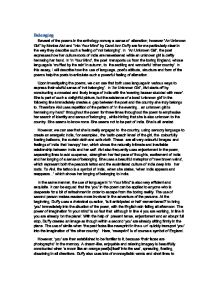 Several of the poems in the anthology convey a sense of alienation; however An Unknown Girl by Moniza Alvi and Into Your Mind by Carol Ann Duffy are for me particularly clear in the way they describe such a feeling of not belonging.

Belonging Several of the poems in the anthology convey a sense of alienation; however "An Unknown Girl" by Moniza Alvi and "Into Your Mind" by Carol Ann Duffy are for me particularly clear in the way they describe such a feeling of 'not belonging'. In 'An Unknown Girl', the poet expresses how her culture roots of India are reawakened while an unknown girl is deftly hennaing her hand. In 'In Your Mind', the poet transports us from the boring England, whose language is 'muffled by the rain' in autumn, to the exciting and wonderful 'other country'. In this essay, I will describe how the use of language, poet's attitude, structure and form of the poems help the poets to articulate such a powerful feeling of alienation. Upon investigating the poems, we can see that both uses language in various ways to express their wistful sense of 'not belonging'. In 'An Unknown Girl', Alvi starts off by constructing a crowded and lively image of India with the 'evening bazaar studded with neon'. She is part of such a delightful picture, but the existence of a local 'unknown girl' in the following line immediately creates a gap between the poet and the country she truly belongs to. Therefore Alvi uses repetition of the pattern of 'In the evening... an unknown girl is hennaing my hand' throughout the poem for three times throughout the poem to emphasise her search of identity and sense of belonging, while hinting that she is also unknown to the country. ...read more.

Here, 'newsprint' is of course a symbol of England. However, 'you' are then established to be familiar to it, because 'their faces are photographs' in the memory. A dream-like, enjoyable and relaxing imagery is beautifully constructed when 'a moon like an orange peel[s] itself into the sea', spreading, floating, dissolving in all directions. Duffy also uses lots of monosyllabic words and short lines to describe the 'other country', particularly in the third verse: 'Seagulls. Bells. A flute...' These short but simple descriptions immediately appeal to our senses, creating a feeling of 'you are there'. Nevertheless Duffy uses such a method to transport us back to the reality too, as we can see: 'A newspaper. English rain.' This brings to an abrupt stop, as though all are only dreams. Although the two poems I have chosen both explore feelings of alienation, the poet's attitude and the context of alienation are very distinguished. With respect to 'An Unknown Girl', Alvi feels alienated because her inborn 'veins' of India are intimately connected with her soul. As we can see, she cannot stop 'clinging to these firm peacock lines'-the experience in the bazaar, being hennaed, is so profoundly deep, unforgettable and memorable. However, Alvi figures out that having not been living in her home country, she feels strange, unknown and alienated. She knows that the cultural roots and bonds brought by the veins will 'fade in a week'. ...read more.

Lastly, the structures and forms of the poems artistically contribute to the meanings and feelings. In 'An Unknown Girl', the use of free verse allows Alvi to explore her flowing thoughts and wonders freely. The use of single verse reinforces the cultural association between India, her cultural roots, and the peacock, tattoo. The particularly long, thin visual layout of the poem shows a hennaed hand and strengthens the existence of India in Alvi's mind. In contrast, the use of free verse and regular layout allows Duffy to create a freely flowing memory of place and imagination. The poetic structure creates a big sandwich of the reality as the tasteless bread at the beginning and in the end, and the imagination as the most delicious and wonderful part in the middle. Such symmetrical and dream-like qualities both give Duffy to strengthen the transience of happiness. In conclusion, 'An Unknown Girl' shows that having an unfamiliar cultural roots is very difficult involving only wistful longing; while 'In Your Mind' shows us the possibility of escaping from reality which will not last long notwithstanding. I think that 'An Unknown Girl' is a more effective poem to show a sense of alienation, because it involves lots of internal struggles and the contrast between the energetic India and her 'not belonging' soul makes us realise the sadness of something we cannot simply change. ...read more.