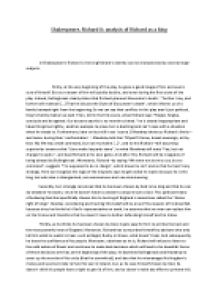 Shakespeare, Richard II: analysis of Richard as a king

﻿Shakespeare, Richard II: analysis of Richard as a king In Shakespeare?s Richard II, the king Richard?s identity can be characterized by several major subjects. Firstly, at the very beginning of the play, he gives a good image of him and seems sure of himself. But our esteem of him will quickly decline, and even during the first scene of the play. Indeed, Bullingbrook clearly states that Richard planned Gloucester?s death : ?Further I say, and further will maintain [?] That he did plot the Duke of Gloucester?s death?, which informs us of a family betrayal right from the beginning. So we can say that conflicts in this play aren?t just political, they?re family matters as well. Then, still in the first scene, when Richard says ?Forget, forgive, conclude and be agreed. ...read more.

Here we recognize the logic of the king who says he gets what he wants because he is the king, but who also is disorganized, non-autonomous and non-domineering. Secondly, he?s strongly convinced that he has been chosen by God to be king and that he can do whatever he wants, since he doesn?t have to answer to anyone but to God. This political theory of believing God has specifically chosen him to be king of England is sometimes called the ?divine right of kings?. Besides, considering and trusting this belief will be one of the reasons of his downfall, because since he thinks he?s God?s representative on earth, he assumes that no man can replace him on the throne and therefore that he doesn?t have to bother defending himself and his status. ...read more.

Finally, in the last scene of act I, Richard?s callous remarks about Gaunt?s illness indicate his lack of respect for anyone besides himself, including the elders of his own family. This self-centeredness will as well help and lead to his downfall. Besides, the fact that Richard chooses to ignore the advice of his dying uncle in act II scene 1 is a sign of his foolishness. And by the time this scene closes, we have learned of the imminent invasion of England by Bullingbrook?s forces ; a piece of information which, with what we already know about his popularity and Richard?s merited unpopularity with the English commoners, implies already the inevitable outcome : Richard?s deposition and defeat at the hands of Bullingbrook. To conclude, Richard in act I and act II scene 1 shows right from the first scene how improper and wrong he is, through all of his inappropriate words, speeches, manners, decisions and choices. ...read more.