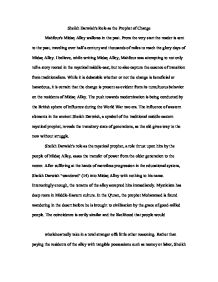 Sheikh Darwish's Role as the Prophet of Change

Mahfouz's Midaq Alley wallows in the past. From the very start the reader is sent to the past, traveling over half a century and thousands of miles to reach the glory days of Midaq Alley. I believe, while writing Midaq Alley, Mahfouz was attempting to not only tell a story rooted in the mystical middle-east, but to also capture the essence of transition from traditionalism. While it is debatable whether or not the change is beneficial or hazardous, it is certain that the change is present as evident from its tumultuous behavior on the residents of Midaq Alley. The push towards modernization is being conducted by the British sphere of influence during the World War two era. The influence of western elements in the ancient Sheikh Darwish, a symbol of the traditional middle-eastern mystical prophet, reveals the transitory state of generations, as the old gives way to the new without struggle.

Sheikh Darwish's role as the mystical prophet, a role thrust upon him by the people of Midaq Alley, eases the transfer of power from the older generation to the newer. After suffering at the hands of merciless progression in the educational system, Sheikh Darwish "wandered" (14) into Midaq Alley with nothing to his name. Interestingly enough, the tenants of the alley accepted him immediately. Mysticism has deep roots in Middle-Eastern culture. In the Q'uran, the prophet Mohammed is found wandering in the desert before he is brought to civilization by the grace of good-willed people. The coincidence is eerily similar and the likelihood that people would

wholeheartedly take in a total stranger offs little other reasoning. Rather than paying the residents of the alley with tangible possessions such as money or labor, Sheikh Darwish returns their hospitality by acting as a vessel of faith, a way to receive communication from God. The residents view Sheikh as a "holy man of God" (14) and upon his arrival to the alley he was "loved and honored" (14). His presence was often viewed as a "good sign" (14). Once again, Mohammed was a holy man and, save the prophet of doom, prophets tend to serve as a good omen from God. When Salim Alwan made Sheikh cry, Uncle Kamil said "'O God, keep us from evil. For [Sheikh] to weep is an omen of some misfortune to come...O God, give us grace!" (244). When Sheikh Darwish is in a bad mood or is wracked by a fit of weeping, it suggests something misfortunate is about to occur. This is obviously a mystical belief because of his status as a prophet. Alwan realizes his mistake and seems to believe that "the whole world was weeping and wailing" and he almost immediately recants as he doesn't want to "anger one of [God's] holy men" (244). Darwish's actions seem to compel the community to act a certain way.

The people of Midaq Alley verbally endowed Sheikh with his ability to "perform miracles and predict the future" (14). His word is abided by as holiness and often never rejected. When he appears in western attire, the residents of the alley come to accept him.

Sheikh Darwish's tendencies to don western attire, and his interactions with it, reveal the accepted creation of a vital link between Midaq Alley and the western world. Sheikh Darwish had come from a big town that had an institution where he taught English. Perhaps the town was even big enough to have a western sector. Whether or not this is the case, Sheikh Darwish brings with him an aura of westernization. He sits

comfortably in the lounge of Kirsha's Cafe in a "cloak with sleeves" and wears a necktie usually "worn by those who affect western dress" (3). Darwish's reverence remains intact despite having and spreading an affinity for western dress. This is the opposite case of the British army and government who try to impose western laws without taking into account the Middle-Eastern peoples' psyche, customs, and religious affiliation. Perhaps, the most western accessory Darwish has is his "pair of expensive-looking gold-rimmed spectacles" (3). The spectacles offer the impression of western affluence on a man who has no money to his name. Also, Mahfouz's use of the word "perches" (3) to describe how the glasses rest on Darwish's nose has a very twentieth century British twinge to it. When Darwish is about to leave the cafe he "took off his spectacles quietly, and polished them with a corner of his shirt" (12). Once again, this action seems like it belongs in an early twentieth century British novel, not in the turbulent period of time Midaq Alley belongs to. Sheikh Darwish's western clothing, coupled with the residents of Midaq Alley acceptance, rather than shunning of it, suggest the youth of the all are progressing into power.

Sheikh Darwish's English translation "vocal bursts" reveal the aggressive, progressive ingraining of the new culture into Midaq Alley. A mjaority of the time Sheikh Darwish remains still, often "lost in the world of his own" (3). But at moments of high tension Sheikh Darwish speaks a snippet in a parable-like, or doomsayer style. These bursts often occur at moments when the topic of conversation is change and transition is in the air. The prophet intends to spell out the situation and make the implicit explicit. One of these moments when Sheikh Darwish "stirs" (9) to life is when there is a

conflict between the poet and Kirsha over change in tastes of the cafe patrons. He utters "The poet has gone and the radio has come. This is the way of God in his creation. Long ago it was told in tarikh, which in English means 'history' and is spelled h-i-s-t-o-r-y" (9). In this line, Darwish informs the patrons of the cafe that times have changed with the introduction of western technologies in the alley. He also mentions that this is the way God had always meant it to be, constantly changing. Darwish's quip about God reveals that he recites the very words of God, something customarily done by a mystical prophet (such as Mohammed). He is preaching change and transition and the visitors of the cafe will come to accept this change as it a message from God. When he mentions Hamida's situation after she ran away to Salim Alwan, he says "she ran away" and that "in English they call that an 'elopement' and it is spelled e-l-o-p..." (244). Darwish says she ran away, something that would normally not happen. Hamida's elopement reveals that times are certainly changing in the alley if a young woman left the alley for the comfort of a strange man. In the beginning of the novel Sheikh Darwish says that "everything has changed...everything has changed except my heart and it still loves the people of the house of Amir" (3). The house of Amir and its people can be viewed as a relic of the ancient Midaq Alley, a time long gone. By the end of this novel Darwish states that "Man is named only to be forgotten and there's never a heart that doesn't change" (285). During the course of the novel he underwent a change of heart. The first half of his assessment reveals that transition and change is inevitable as things and memories will transform as history recedes into oblivion. His assessment on the human heart is a contradiction with his earlier statement and suggests that Darwish has changed his opinion on the past and

his love if it and is ready to accept the future wholeheartedly as it is impossible to impede its progress. What is interesting about his English bursts is the way in which he utters them. By spelling the word out letter by letter and giving the definition similar to the way a dictionary does, the prophet is teaching the residents of Midaq Alley. Perhaps his position as teacher in Midaq Alley is simply an extension of his previous job as an English teacher in his past life. But now, rather than simply teaching the language of the west, Sheikh Darwish teaches the parable of transition and change, the very words of God. By doing so he ingrains the acceptance of the new culture brought to the alley by both the west, and the youth influenced by it.

Midaq Alley is a "[gem] of times gone by" (1) and the story's setting is one based off the past. But as we enter the story, we realize that we have entered a transitory state. The west has reached across the globe and finally touched this gem. The introduction of western apparel and ideologies transforms the traditional Muslim mystical prophet, and with him his sermons. The respect garnered by his role as prophet coupled with Darwish's acceptance of western dress and affluence ease the transition of power from one generation to the next in Midaq Alley.