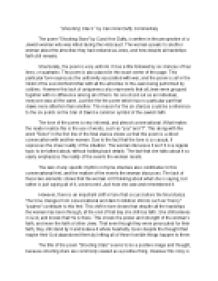 ﻿?Shooting Stars? by Carol Ann Duffy Commentary The poem ?Shooting Stars? by Carol Ann Duffy, is written in the perspective of a Jewish woman who was killed during the Holocaust. The woman speaks to another woman about the atrocities they had endured as Jews, and how despite all hardships faith still remains. Structurally, the poem is very uniform. It has a title followed by six stanzas of four lines, or quatrains. The poem is also placed in the exact center of the page. This particular form expresses the uniformity associated with war, and the poem is set in the midst of the second World War with all the atrocities to the Jews being performed by soldiers. However this lack of uniqueness also represents that all Jews were grouped together with no difference among all of them. No one stood out as an individual, everyone was all the same. Just like the the poem which has no particular part that draws more attention than another. The reason for the six stanzas could be a reference to the six points on the Star of David a common symbol of the Jewish faith. ...read more.

?Shooting? literally referring to shooting the Jews, who are represented by the word ?Stars? in reference to the Star of David. The imagery in the first and second lines of the poem ?break our fingers to salvage my wedding ring? can show that people would go about things with the Jews in the most brutal way possible. Rather that just taking her ring, they break all her fingers to do so, which is a very extreme action. The action of stealing the ring itself can represent the idea that the Jewish people in this time period were not viewed as being worthy of love, so the soldiers will take that from them too. In the second and third lines, the listing of the peoples names without any punctuation groups all the Jewish people together. This serves to show that the whole group was affected, by the Holocaust not just individual people. This also draws the attention to the idea that so many people were effected that they all blur into one image, one group. The simile at the beginning of the second stanza ?daughters, upright as statues? shows that first, the Holocaust affected people of all ages, not just women. ...read more.

The entire fifth stanza uses the word ?after? to describe that after all the terrible things that happen during the Holocaust life will go back to normal for so many people. After the ?immense suffering? and ?terrible moans? people will do things that is a part of their normal life. The world will still ?turn in its sleep? and ?spades shovel soil?. Everything will go back as usual and resume its normal purpose. The specific example ?after the history lesson children run to their toys? is one that also foreshadows what will happen after the Holocaust when it becomes a history lesson and after children learn about its atrocities they too will return to life as usual without giving is a second thought. These connections are all followed by another list of names with no separation to draw attention back to the people that died and were affected by the Holocaust, turning into that blur that is indistinguishable and that no one remembers. Carol Ann Duffy wrote this poem in order to shed light on how much the Holocaust affected some people so severely and others not at all. It also places emphasis on how powerful faith is, and despite so many hardships and atrocities people still keep faith and believe that God is out there looking after them. ...read more.