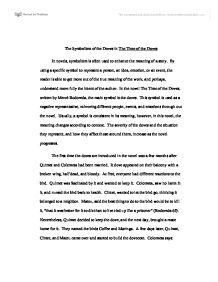 Symbolism of the Doves

The Symbolism of the Doves in The Time of the Doves In novels, symbolism is often used to enhance the meaning of a story. By using a specific symbol to represent a person, an idea, emotion, or an event, the reader is able to get more out of the true meaning of the work, and perhaps, understand more fully the intent of the author. In the novel The Time of the Doves, written by Merc� Rodoreda, the main symbol is the doves. This symbol is used as a negative representative, mirroring different people, events, and emotions through out the novel. Usually, a symbol is consistent in its meaning, however, in this novel, the meaning changes according to context. The severity of the doves and the situation they represent, and how they affect those around them, increase as the novel progresses. The first time the doves are introduced in the novel was a few months after Quimet and Colemeta had been married. It dove appeared on their balcony with a broken wing, half dead, and bloody. At first, everyone had different reactions to the bird. Quimet was fascinated by it and wanted to keep it. Colometa, saw no harm in it, and nursed the bird back to health. Cintet, wanted to let the bird go, thinking it belonged to a neighbor. ...read more.

In fact, one day, when she returned home from work, she heard her son Antonio and her little girl Rita, laughing upstairs. Normally, when she got home from work, they were on the floor sleeping. Hearing their laughter, however, sent her rushing up the stairs. "Holding my breath while I turned the key in the lock..." she saw: The balcony was full of doves and there were some in the hallway too, and I couldn't see the children anywhere... I found them in that dark little room where we'd put Antonio when he was very small... Rita was sitting on the floor with a dove in her lap and the boy had three doves in front of him (Rodoreda 97). Having the doves in her home became a difficult enough burden to carry, but to see the things she disliked most running around, wild with her children, would be a mother's nightmare. Colometa left the room with birds flying everywhere and her children crying. "And the trouble I had getting those doves out" she said, "and the act those kids had been putting on! I could see for a while the doves had [become] masters of the apartment in the morning while I was gone" (Rodoreda 97). When Quimet got home, he "thought it was all very cute" (Rodoreda 97). ...read more.

It didn't take long for her conscious to turn on, and then she was back to normal. Interestingly enough, Colometa and Quimet seem to change places on the next page. Quimet exclaims, "the doves weren't worth a penny and all they were good for was picking up bits of straw in their beaks and making nests and altogether it was a pain" (Rodoreda 113). Not long after, Quimet went off to war with Mateu and Cintet. Colometa was left to take care of the children and doves, but life began to settle back down. The doves eventually left, except for one. The day Colometa was told of Quimet's death was the same day the last bird died: And inside, all the way in the back, there was a dove lying with his belly up, the one with the half moons. His neck feathers were still wet from his death sweat, his eyes were cloudy. Feathers and bones. He was already cold (Rodoreda 138). The dove's role in this novel was beyond significant. Their symbolism for specific people, events, and emotions allowed a deeper look into the heart of the book. The affect the doves had been almost always on Colometa. Even after the last dove died, she was still affected by them. A woman in the park was one day observing her, "She misses her doves, the dove lady misses her doves, and all she does is long for them" (Rodoreda 175). ...read more.