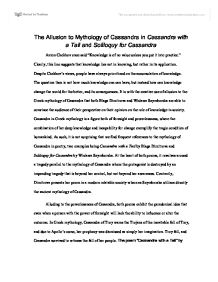 The Allusion to Mythology of Cassandra in Cassandra with a Tail by Blaga Dimitrova and Soliloquy for Cassandra by Wislawa Szymborska.

The Allusion to Mythology of Cassandra in Cassandra with a Tail and Soliloquy for Cassandra Anton Chekhov once said "Knowledge is of no value unless you put it into practice." Clearly, this line suggests that knowledge lies not in knowing, but rather in its application. Despite Chekhov's views, people have always prioritized on the accumulation of knowledge. The question then is not how much knowledge one can have, but instead how can knowledge change the world for the better, and its consequences. It is with the creative use of allusion to the Greek mythology of Cassandra that both Blaga Dimitrova and Wislawa Szymborska are able to convince the audience of their perspective on their opinion on the role of knowledge in society. Cassandra in Greek mythology is a figure both of foresight and powerlessness, where the combination of her deep knowledge and incapability for change exemplify the tragic condition of humankind. As such, it is not surprising that we find frequent references to the mythology of Cassandra in poetry, two examples being Cassandra with a Tail by Blaga Dimitrova and Soliloquy for Cassandra by Wislawa Szymborska. At the heart of both poems, it revolves around a tragedy parallel to the mythology of Cassandra where the protagonist is destroyed by an impending tragedy that is beyond her control, but not beyond her awareness. ...read more.

Ultimately, the techniques attributes to a tone of self-righteousness as a result of Cassandra's knowledge. Nonetheless, her prophetic words ultimately end without any influence, hence "It turns out I was right. But nothing has come of it" (line 37-38) Furthermore, both poems illuminate a sense of despair and torment in the narrator as a portrayal of the consequences in being knowledgeable. Up until the third stanza, the narrator's life has been ordinary; however now, everything has changed, hence "the oracular cat disappeared, with my childhood, forever." (line 24-25) The loss of childhood signified a loss of innocence and ignorance, along with a loss of any connections to the protagonist's previous life that was full of love and compassion. It is the person's ability to connect the past with the present, and more significantly, convey a foreshadowing prospect of doom for the future to come that brings her torment. Simply, she has lost the little wonders of an carefree life. The third stanza begins as if a new chapter has begun in the protagonist's life. In the midst of this new chapter, the protagonist is trying to send out a warning, much like the cat, to others who lack the knowledge and foresight. In the poem the protagonist warns of impending doom of our "green careening planet". ...read more.

Into the fifth stanza, the reader now sees that Cassandra has elevated herself so far above the human world that she speaks as if she is not a part of it. Knowledge has not only enhanced Cassandra's self-importance, but also her isolation. "Condemned. Trapped from birth in departing bodies. But in them they bore a moist hope," (line 30-32) her descriptions of humans are that of fascination and pity. "Condemned" and "Trapped" shows Cassandra's pity towards their unfortunate lives, and "a moist hope" signifies for Cassandra's fascination but also the lack of understanding towards the idea of hope. Contrarily, in "Cassandra with a Tail", the poem is more earth bound, and examines the world of the persona before and after the persona's change from na�ve to wise. Therefore the challenges the persona faces are more understandable as well as more real. This gives the poem more elements of life and makes it easier for the reader to connect with as well as accept the moral of the poem. In both poems "Cassandra with a Tail" and "Soliloquy for Cassandra" knowledge was carefully incorporated. Which leads to both poems in having a similar theme that knowledge alone does not bring about power, and can be of a great source of pain and despair since not everyone will understand the message. This theme is subtly incorporated into both poems through allusions, imagery, and other powerful literary devices. It is precisely these deep analysis and careful connection that makes these two poems great works of intelligent minds. ...read more.