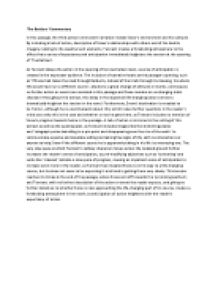 ﻿?The Battlers? Commentary In this passage, the third person omniscient narration reveals Snow?s environment and his solitude. By including a lack of action, description of Snow?s relationships with others and of the hostile imagery relating to the weather and elements, Tennant creates a foreboding atmosphere to the effect that a sense of expectancy and anticipation immediately heightens the tension at the opening of ?The Battlers?. As Tennant delays the action in the opening of her Australian novel, a sense of anticipation is created in the expectant audience. ...read more.

Furthermore, Snow?s destination is revealed to be ?home?, although he is unenthusiastic about this, which raises further questions in the reader?s mind as to why this is the case and whether or not he gets there, as Tennant includes no mention of Snow?s progress towards home in the passage. A lack of action is mirrored in the setting of this extract as well as the opening plot, as Tennant includes images like the stretching planes and ?telegraph poles dwindling to a pin-point and disappearing over the rim of the earth? to communicate a sparse and desolate setting containing few signs of life, with no ...read more.

even more in the reader, as Tennant has revealed Snow is on his way to a life-changing course, but he does not seem to be expecting it at all and is getting there very slowly. This tension reaches its climax at the end of the passage, where Snow sets off towards the ?promising wethers?, and Tennant, with no further description of the action or event the reader expects, and giving no further details as to whether Snow is now approaching the life-changing part of his course, creates a foreboding atmosphere in her novel, as anticipation of action heightens with the reader?s expectancy of action. ...read more.