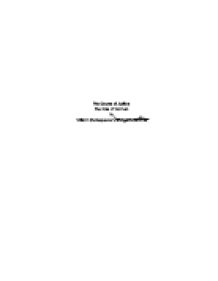 The Course of Justice . The Role of Women in William Shakespeares, King Richard III

The Course of Justice The Role of Women in William Shakespeare's, King Richard III "Woman and men both deserve justice, the only difference is that woman must fight for it" - Emily Murphy During the Renaissance, women, for the most part, were considered inferior to men. If they held importance in the eyes of men, it was usually only as a valuable asset, a tool that could be used at will. Unfortunately, due to the severe sexism, women had inconsequential voices in society. This does not mean to say that many courageous women did not try getting their voices heard and succeed. In his play, King Richard III, Shakespeare uses women to voice morality and resistance. In Richard's opening soliloquy, he openly admits to being "determined to prove a villain" (I, i, 30). He does not conceal his sinister motives form the audience; in fact, he flaunts them as though he wants spectators to admire his skill at villainy. Nevertheless, every evil must be parried with goodness. Thus, Shakespeare partly fills this roll using the women of the play. They are often able to see through his carefully cultured fa�ade and realize the catastrophic consequences of his underlying motives. The characters Anne, Elizabeth, the Duchess and Margaret are the play's most influential women. ...read more.

Elizabeth once regarded Margaret as being nothing but a "hateful wither'd hag" (I, iii, 214). The fact that she now turns to her for guidance proves the extent to which Elizabeth will go to, to bringing about justice a cast away evil. Knowing that Margaret can competently plague people with blasphemy, Elizabeth begs her "to help [her] curse" (80). The eloquent and well versed queen wants morals to be upheld so badly that she is willing to sink to a level that she scoffed at in her former brilliance. Elizabeth's finale stand against Richard and the evil he embodies ultimately ends the War of the Roses. After Richard begs her to "prepare [her daughter's] ears to hear a wooer's tale" (IV, iv, 327), Elizabeth betrays him, she stands for innocence and compassion and refuses to prepare her daughter's ear if it means that she will receive an undoubtedly short lifetime filled with despair. Instead, Elizabeth aids in her daughter's marriage to Richmond. The young Yorkist marrying the Lancastrian would end the feud between the two families and strengthen their hold on the throne. Elizabeth's strong moral ground and refusal to accept evil ultimately brings peace and a new, happier era. Even Richard's own mother wishes to witness his demise because of the havoc and destruction he has brought to their family. ...read more.

Nevertheless, she is the only character who realizes that Richard is "a murderous villain" (I, iii, 134) straight from the start, declares this in front of him and all of his acquaintances and stand by her story for the entirety of the play. All the while, she shows no signs of remorse or fear. Margaret is the character that embodies the essence of morality and resistance more than all others for the entire course of the play. William Shakespeare, in his play King Richard III, makes it evident that the women are meant to voice good ethics and opposition against foreseen evil. This can be seen in Anne's loathing of her husband and her acceptance of the consequences she has earned by giving him more power. Elizabeth constantly searches for a way to protect those she loves form approaching evil also is a fine example. Even Richard's own mother despises him because he has no morals and cannot be stopped from wreaking havoc. Most importantly, there is Margaret, whose unwavering morals and longing to barricade the path of those who made her life miserable, dominates her life and makes her a courageous and fearless woman. Though woman in Richard the Third's time were consider inferior to men, the women in Shakespeare's play are the ones who rise up against evil and ensure that the course of justice is set into motion. ...read more.