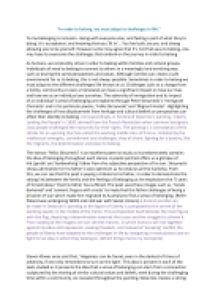 the experiences of Peter Skrzynecki as a migrant to Australia through his poems and the visual imagery portrayed by Delacroix show us that there are a number of important elements that surround the concept of belonging.

﻿?In order to belong, we must adapt to challenges in life.? To me belonging is inclusion...being with everyone else, and feeling a part of what they're doing. It is acceptance, and knowing that you 'fit in'... You feel safe, secure, and strong allowing you to be yourself. However some may agree that it?s not that easy to belong, one may have to overcome the challenges that embark on the journey in order to belong. As humans, we constantly strive in order to belong within families and cultural groups. Individuals all need to belong to connect to others in a meaningful and enriching way such as sharing the same perspectives and values. Although families can create a safe environment for us to belong, this is not always possible. Sometimes in order to belong we must adapt to the different challenges life throws at us. Challenges such as a change from a family, community or even a homeland can have a significant impact on how our lives and how we as an individual see ourselves. ...read more.

(Refer Poland was undergoing WWII and cold war with Soviet Unions) A distinct parallel can be made in Delacroix?s painting as the figure of Liberty is composed to the centre of the painting exactly in the middle of the frame. This composition itself denotes the main figure with the flag, depicting a determination towards the cause and the struggle to achieve it. From looking at the imagery we can see the manner, in which humans will rise together against injustice and oppression, seeking freedom, and instead of ?escaping? conflict the people of liberty have adapted to the challenges in life by instigating a revolutionary war to fight for an idea in which they belong to. (Which brings me to my next point) Steven Kloves once said that, ?Happiness can be found, even in the darkest of times of adversity, if one only remembers to turn on the light.? This idea is present in each of the texts studied as it presents the idea that a sense of belonging ...read more.

However this also creates a paradox as ?pigeons? represent freedom and lack of restriction. The long distanced travelled by the migratory birds represent the adversity that each individual must experience to get to the other side, where they may reunite with their identity and beliefs. Belonging is a complex, multi-faceted concept that encompasses a wide range of different adversity, challenges and barriers which often creates feelings of isolation, depression and loss of identity. A struggle for cultural belonging is evident in Migrant Hostel?s first stanza where a sense of uncertainty is expressed in the line ?sudden departures? and ?who would be coming next? permeates the poem. The emotional instability of the migrants is also expressed through the alliterative ?h? in ?Memories of hunger and hate.? Moreover, the connotations of ?a barrier at the main gate? reiterate the migrant?s segregation from the host society, implying the chance of belonging is limited. This is also depicted in the simile ?like a finger/Pointed in reprimand or shame?, demonstrating their alienation. ...read more.