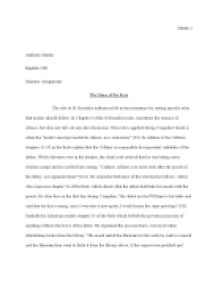 The Name of the Rose. The rule of St. Benedict influences life in the monastery by setting specific rules that monks should follow.

﻿Martin 1 Anthony Martin English 3 IB Summer Assignment The Name of the Rose The role of St. Benedict influences life in the monastery by setting specific rules that monks should follow. In Chapter 6 of the St Benedict rules, it portrays the essence of silence, but does not rule out any dire discussion. This rule is applied during Compline which is when the "monk's meal proceeded in silence, as is customary" (94). In relation to the Cellarer, chapters 31-32 in the Rule explain that the Cellarer is responsible for important valuables of the abbey. While Salvatore was in the kitchen, the chief cook noticed that he was hiding some chicken scraps and he scolded him saying, "Cellarer, cellarer, you must look after the goods of the abbey, not squander them!"(121). He reminded Salvatore of the rule that he follows. Abbot Abo expresses chapter 56 of the Rule, which directs that the abbot shall take his meals with the guests. He does this on the first day during Compline, "the abbot invited William to his table and said that for this evening, since I was also a new guest, I would enjoy the same privilege" (93). ...read more.

Anchorites, or hermits, who, after long successful training in a monastery, are now coping single-handedly, with only God for their help; (3) Sarabaites, living by twos and threes together or even alone, with no experience, rule and superior, and thus a law unto themselves; and (4) Gyrovagues, wandering from one monastery to another, slaves to their own wills and appetites. Martin 3 Chapter 6 recommends moderation in the use of speech, but does not enjoin strict silence, nor prohibit profitable or necessary conversation Chapter 7 divides humility into twelve degrees, or steps in the ladder that leads to heaven:(1) Fear God; (2) Substitute one's will to the will of God; (3) Be obedient to one's superior; (4) Be patient amid hardships; (5) Confess one's sins; (6) Accept oneself as a "worthless workman"; (7) Consider oneself "inferior to all"; (8) Follow examples set by superiors; (9) Do not speak until spoken to; (10) Do not laugh; (11) Speak simply and modestly; and (12) Be humble in bodily posture. Chapters 8-19 regulate the Divine Office, the Godly work to which "nothing is to be preferred", namely the eight canonical hours. Detailed arrangements are made for the number of Psalms, etc., to be recited in winter and summer, on Sundays, weekdays, Holy Days, and at other times. ...read more.

Martin 5 Chapter 72 briefly exhorts the monks to zeal and fraternal charity. Chapter 73, an epilogue, declares that the Rule is not offered as an ideal of perfection, but merely as a means towards godliness, intended chiefly for beginners in the spiritual life. 2. Eco sets up the interest concept of "knowing is seeing" during the conversation between William, Adso and the master glazier, Nicholas of Mormimondo. People sometimes do not accept new improvements to life, just because it does not come in accord with what they believe in. They might know what it may do but simply do not believe in it. William expresses this idea when he's describing why he had to restrain himself from using his glasses during trials saying, "I myself, during trials in which someone was suspected of dealings with the Devil, have had to take care not to use these lenses...I myself would have been considered a friend of the accused" (87). It proves how those that were present were not mentally ready to see such an instrument as the glasses he hid. In its entirety the concept metaphor ?knowing is seeing? is basically saying that when you know more of something, you see things more clearly and are more aware of your surroundings. 3. ...read more.