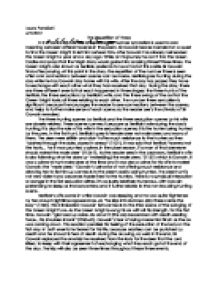 The Repetition of Three. In Sir Gawain and the Green Knight, number symbolism is used to add meaning between different scenes in the poem.

Laura Pandiani 4/7/2012 The Repetition of Three In Sir Gawain and the Green Knight, number symbolism is used to add meaning between different scenes in the poem. Sir Gawain leaves Camelot on a quest to find the Green Knight to let him behead him, after Gawain has already beheaded the Green Knight a year and a day ago. While on his journey he can't find the Green Castle and prays that the Virgin Mary would guide him; crossing himself three times. The Green Knight, also known as Bertilak, pretends to be a host at this castle Sir Gawain finds after praying. At this point in the story, the repetition of the number three is seen often and connections between scenes can be made. Bertilak goes hunting during the day while he has Gawain stay home with his wife. After the day has passed they have to exchange with each other what they had received that day. During the story, there are three different events that each happened in three stages: the three hunts of the Bertilak, the three seductions by Bertilak's wife, and the three swings of the ax that the Green Knight took; all three relating to each other. The number three symbolism is significant because it encourages the reader to see connections between the scenes, and helps to further make sense of each scene; as the reader see's the chivalry of Sir Gawain revealed. ...read more.

It wasn't until the boar got tired that Bertilak himself was able to kill him. On the second day in the bedroom, Bertilak's wife relates to the hunting of the boar because she too was a challenge for Gawain. Her visit to Gawain is more abrupt and ferocious, even more difficult than last time. As the boar made the men fight for a while, Bertilak's wife also stayed with Gawain for a long time, "thus she tested his temper and tried many a time" (1549). This time because of her persistence she was able to get two kisses, which Gawain exchanged with Bertilak for the boar. The second ax swing by the Green Knight, Gawain was brave and he didn't move this time. But the Green Knight didn't go through with his swing. He told Gawain he was only testing him to be sure he wasn't going to move again and to "keep your [his] neck bone clear, if this [next] cut allows! (2297). Although Sir Gawain may have been brave this time; he wasn't struck by the blow of the ax. Connecting to the bedroom, he wasn't fully tested by Bertilak's wife either. She is more forward toward Gawain this time, like the aggressive boar. ...read more.

Gawain realized his life was spared and confronted the Green Knight about his wife's belt he received saying, "I confess, knight, in this place...Most dire in my misdeed" (2385-6). The Green Knight accepts his confession of having the belt and tells him he is free of fault. The Green Knight gives Gawain the belt to keep, as a reminder to him of their encounters, and Gawain leaves to return to King Arthur's Round Table in Camelot. These three different events all have three parts within them, linking one to one another. The animals in the hunt represented Bertilak's wife and how her seduction on Gawin got progressively more intense for him to resist; as the animals got trickier for Bertilak to hunt. Each swing of the ax of the Green Knight, who was actually the man hunting, represented the way Gawain responded to the three seductions by the Green Knight's wife. The Green Knight acknowledges that although Gawain didn't exchange the belt like he should have, he also resisted committing adultery with his wife, who was relentless on Gawain. This is why the Green Knight just cut him, instead of beheading him and killing him, like he had said he would a year and a day ago. But because Sir Gawain was for the most part was faithful to Bertilak, he was able to return to Camelot; demonstrating the qualities of bravery and loyalty. ...read more.