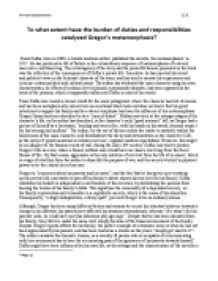 The role of duties and responsibilities in 'the metamorphosis'

﻿Arman Babakhanian 12 E To what extent have the burden of duties and responsibilities catalyzed Gregor?s metamorphosis? Franz Kafka, born in 1883, a Jewish Austrian author, published the novella ?the metamorphosis? in 1915. He has portrayed a life of failure in the extraordinary sequence of metamorphosis of a decent man into a worthless bug. The extravagancy of the story and the powerful themes presented in the book was the reflection of the consequences of Kafka?s private life. Somehow, he has injected his social and political views in the fictional character of the story, and has tried to narrate his experiences and criticize certain political and cultural issues. The author has attributed the main character using his own characteristics, as effects of medium-level schizoid, a personality disorder, has been appeared in the traits of the persona, which it supposedly influenced Kafka in most of his works. Franz Kafka has created a surreal world for the main protagonist, where the character has lost its senses, and has been metaphorically entered into an emotional black hole and does not know that his good intentions to support his family and be a decent employee has been the influence of his metamorphosis. Gregor Samsa has been described to be a ?man of duties?. Military services, at the younger stages of the character?s life, as the author has described, is the character?s only ?good memory? left, as ...read more.

The author escalates the dramatic tension, as a socially ill person who is incapable of communicating with his environment has to bear the excruciating pain of the ignorance of his parents towards himself. Kafka might have been influenced by his own life, as the settings and the characteristics of the novella is very similar to that of his own. Gregor?s relationship with his father, may have been a slight indication to Kafka?s family and his inability to correlate with his parents especially, his father. Gregor?s sister, Grete, is another character that Kafka has used to illustrate Gregor?s dependency, and his abnormal metamorphosis into a beetle. Grete is the person who takes care of Gregor, which clearly indicates the unconventional circumstances of Gregor, literalizes the metamorphosis, and removes the story from the shed of dreams, and surrealism, as if he was really transformed into an insect. Gret is the only character that shows pity for Gregor, and treats him as a human and most important of all as her brother. However, Kafka moderately changes the views of Grete on Gregor, as Gregor reveals himself to the boarders. Grete feeds him and helps him in ordinary things, but she gets disgusted by his bug like, sordid actions. She gave up on her and realized that ?the only solution was that, Gregor must go?, and that?s where the effects of schizoid emerges in Kafka?s distinct writing style. ...read more.

Of all the factors and characters? role in the Gregor?s life, it is Gregor himself that has been the most heinous towards himself. Gregor?s characteristics, has made the other characters to be manipulative and to some extent the greediness of their actions towards Gregor, is the cause of ?the metamorphosis?. The author describes Gregor?s career as a failure, whereas ?other salesmen live like a harem women, and enjoy their life.?If he were to try to live the same life as them, his boss would ?throw him up on the spot?, which again the power of the boss and his dominance against the employee has been emphasized, and is an indication to the Gregor?s over responsible nature, which has been recognized by his family and especially by his boss, whereas once being late from work, surprised his boss and caused him to go over to Gregor?s house to find out that ?how could Gregor miss the train??. The effect of Gregor?s duties and responsibilities on him was the preliminary cause of the metamorphosis. However, in an ordinary life, a responsible man, who provides for his family and tries to concur with his boss, in order to become a good employee, would not be treated as feckless beetle. Therefore, duties and responsibilities were not the only incites that provoked the metamorphosis, but the surreal environment, the ungrateful family, the financial situation, and most importantly Gregor himself were the catalysts of the metamorphosis of Gregor into a beetle. ________________ [1] Page 21. ...read more.