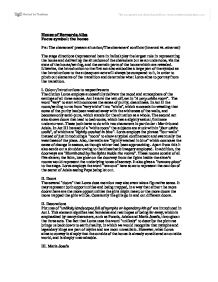 The symbol of the house in Lorca's House of Bernarda Alba

House of Bernarda Alba Focus symbol: the house Pts: The characters' present situation/The characters' conflicts (internal vs. external) The stage directions (represented here in italics) play the largest role in representing the house and delivering the situations of the characters but as an undertone, via the state of the house/setting, and the certain parts of the house which are revealed. Likewise, the introduction to the first act also embodies a large part of the symbol as the introductions to the subsequent acts will always be compared to it, in order to pinch out elements of the transition and determine what Lorca aims to portray from the transition. I. Colour/introductions to respective acts The diction Lorca employs successfully delivers the mood and atmosphere of the settings of all three scenes. Act I starts the text off, set in "A very white room". The word "very" to start with connotes the sense of purity, cleanliness. ...read more.

It also gives a "tenuous glow" to the stage. Lorca employs the word "tenuous" here so as to represent the caution of the secret of Adela seeing Pepe being let out. II. Doors The several "doors" that Lorca does mention may also even take a figurative sense. It may represent both opportunities and being trapped, in a way that either the more doors there are the more opportunities the girls might meet; or the more doors the more trapped the girls will be. Constantly the girls go in and out different doors. II. Decorations Pictures of "unlikely landscapes full of nymphs or legendary kings" are introduced in Act I. This element signifies real fantasies and real hopes of being far away, which is emphasized by many characters, such as Poncia, Adela and Maria Josefa, throughout the three acts. The fact that Lorca uses the word "unlikely" to describe the pictures brings us back down to earth/reality, in which we would recognize that nymphs and legendary kings are part of myths and are most unrealistic. ...read more.

Like her, these hopes, even, have to be locked up and away as Bernarda Alba would hear nothing of it. Ultimately, her physical segregation from the rest of the house not only stands for itself but also the minds of the girls, which makes it an important symbol to note. IV. Other subcomponents Windows: the girls are only allowed to talk to boys through the windows of their bedrooms. The patio: is where the men would gather. almost like a voice in the back of their heads brings us back down I found that when Lorca uses the word "doors", if taken in a figurative sense, may represent both opportunities, and on the other hand, being trapped. More doors = faster you are in finding a way out but in a sense more doors can also = the more trapped, there will always be a door ahead. leading illuminated faint, low glow, secrets are coming to surface but are not revealed. Thirst vs. heat- related to sexual oppression Death escape and hypocrisy ...read more.