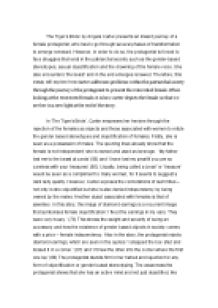 The Tigers Bride by Angela Carter presents an inward journey of a female protagonist, who has to go through several phases of transformation to emerge renewed.

﻿The Tiger?s Bride? by Angela Carter presents an inward journey of a female protagonist, who has to go through several phases of transformation to emerge renewed. However, in order to do so, the protagonist is forced to face struggles that exist in the patriarchal society such as the gender-based stereotypes, sexual objectification and the drowning of the female voice. She also encounters ?the beast? and in the end emerges renewed. Therefore, this essay will explore how Carter addresses problems within the patriarchal society through the journey of the protagonist to present the reinvented female. When looking at the reinvented female, it is how carter depicts the female so that we see her in a new light at the end of the story. In ?The Tiger?s Bride?, Carter empowers her heroine through the rejection of the females as objects and those associated with women to refute the gender based stereotypes and objectification of females. Firstly, she is seen as a possession of males. The opening lines already show that the female is not independent; she is owned and used as leverage. ?My father lost me to the beast at cards? (56) and ?I have lost my pearl/if you are so careless with your treasures? (60). Usually, being called a ?pearl? or ?treasure? would be seen as a compliment to many women, for it seems to suggest a dark lady quality. ...read more.

In a moment of self-realisation, she takes control of what she wants, her future. She makes her own decisions as seen in the quotes ?I had been bought and sold, passed from hand to hand. That clockwork girl who powdered my cheeks for me; had I not been allotted only the same kind of imitative life amongst men that the doll-maker had given her?? (70),?I will dress her in my own clothes, wind her up, send her back to perform the part of my father?s daughter.? (73). She no longer allows herself to be silenced by the males. This shows how she breaks out of the boundaries set by patriarchal society by refusing to play the roles that society expects ? such as the daughter. In a patriarchal society, females are often viewed as a sexual entity. However, Carter subverts this idea through the heroine?s encounter with the beast - one that acts as a pivotal point in the reinvention of the female. ?My master?s sole desire is to see the pretty young lady unclothed nude without her dress and that only for the one time after which she will be returned to her father.?(64) The word ?returned? suggests that the female is a sexual experience that can be bought, the ultimate belittlement of the woman. It is due to the idea of females being seen as a sexual entity, which causes the female protagonist to assume the worst of the beast when he makes this request. ...read more.

It shows that she is not a meek animal anymore but one that is brave and a combination of both masculine and feminine traits ? the new woman. ?Clothes are removed ?stripping off my own underpelt? (pg 73), ?not beasts nor women were equipped with the flimsy, insubstantial things? (70). This again goes to the idea of returning to the most elemental form of life, no masks to hide behind, everything out in the open. Even the beast hides himself from her, he looks like a man on the outside but a beast on the inside and this is possibly a comment on how society puts a mask on us, we conceal our true animalistic selves through the stereotypes that civilization has inscribed into us. The final transformation at the end of the story also seems be a liberation from her former self. There is an achievement of some sort of equality at the end; all the characters shed their pelt and reach a primordial state where they are free. To conclude, Carter reinvents the female by addressing struggles in a patriarchal society by looking at the journey of the protagonist. She provides an ending that allows us to examine the place of the reinvented female ? an independent woman or one that possesses masculine and feminine traits and coexists with males and that females should be aware of societal conventions and not allow that to limit themselves. ...read more.