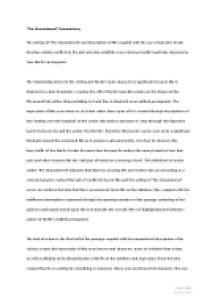 ﻿?The Unnumbered? Commentary The setting of ?The Unnumbered? and description of Nio coupled with the use of narrative hooks develop existing conflicts in the plot and also establish a new internal conflict and help characterise Sam North?s protagonist. The relationship between the setting and North?s main character is significant because Nio is depicted as a lone bystander, creating the effect that he typically resides on the fringes of the life around him rather than partaking in it and thus is depicted as an unlikely protagonist. The impression of Nio as an observer of action rather than a part of it is created through descriptions of him ?looking over the handrail? at the action. Nio desires someone to ?step through? the figurative barrier between he and the action ?into his life?, therefore this barrier can be seen to be a significant blockade around the ostracised Nio as it assumes a physical entity. It is clear he observes the busy traffic of the North Circular for some time because he notices the many brands of cars that pass and other features like the ?odd pair of hands on a steering wheel?. ...read more.

This suspicion is further developed from descriptions of his ?mind...waiting? which provokes a mild frustration at Nio?s lack of purpose and lack of clarity about what or who he is waiting for. The inclusion of narrative hooks at strategic points as the passage develops builds the tension and suspense for new conflicts to unravel within ?The Unnumbered?. This is made clear by hooks like ?would her grave be next to his?? where North reveals that there is a women Nio is thinking of to absorb the reader but not revealing any more specific information to build the tension and desire to continue reading. North continues in this vein for a paragraph of conditional tense including phrases such as ?would [a gravestone] describe them as beloved?? to establish the idea of unrequited love and thus evoking sympathy for Nio?s character. The use of rhetorical questions also adds to suspense, and the third person narrative is cleverly used by North to the effect of making his protagonist appear more enigmatic and evoke a desire to learn more about this woman in his thoughts. Hooks such as ?Then his reverie was interrupted.?, in a paragraph and sentence of its own to emphasise physically on the page and with the syntax that this is ...read more.

Through Nio not being courageous enough to take the opportunity that he waited for and to get involved with the action he observes so well, he establishes an internal conflict within himself best summarised by the quote ?the desire to help but he couldn?t know what was for the best?; this tone effectively captures the divergence in Nio?s own mind about how to act for the best and make a decision, which eventually results in no action being taken at all. With the passage ending with a rhetorical question, it leaves no conflicts resolved nor any signs of them resolving themselves soon, as the closing statements of Nio?s thoughts are still wrought with uncertainty and self-doubt portraying his internal conflict. Although the passage ends where it starts, with Nio isolated and watching ?the cars passing by?, he himself has nevertheless made a transition and developed as a result of witnessing the conflict of the as yet anonymous girl. This is evidenced in the text, where ?it felt like a spring cocked in him? symbolises his change in mindset and suggests that in future he will no longer just observe but take action. Ciara Lally 16.03.2010 ...read more.